The two groups of archosaurs, crocodilians and birds, form an extant phylogenetic bracket for understanding the reproductive behaviour of dinosaurs. This behaviour is inferred from preserved nests and eggs, and even gravid individuals. Data indicate that many ‘avian’ traits were already present in Paraves—the clade that includes birds and their close relatives—and that the early evolution of the modern avian form of reproduction was already well on its way. Like living neornithine birds, non-avian maniraptorans had daily oviposition and asymmetrical eggs with complex shell microstructure, and were known to protect their clutches. However, like crocodilians, non-avian maniraptorans had two active oviducts (one present in living birds), relatively smaller eggs, and may not have turned their eggs in the way that living birds do. Here we report on the first discovery of fossilized mature or nearly mature ovarian follicles, revealing a previously undocumented stage in dinosaur reproduction: reproductively active females near ovulation. Preserved in a specimen of the long bony-tailed Jeholornis and two enantiornithine birds from the Early Cretaceous period lacustrine Jehol Biota in northeastern China, these discoveries indicate that basal birds only had one functional ovary, but retained primitive morphologies as a result of their lower metabolic rate relative to living birds. They also indicate that basal birds reached sexual maturity before skeletal maturity, as in crocodiles and paravian dinosaurs. Differences in follicular morphology between Jeholornis and the enantiornithines are interpreted as forming an evolutionary gradient from the reproductive condition in paravian dinosaurs towards neornithine birds. Furthermore, differences between the two enantiornithines indicate that this lineage might also have evolved advanced reproductive traits in parallel to the neornithine lineage. 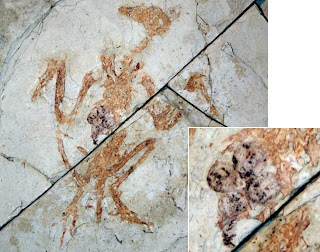