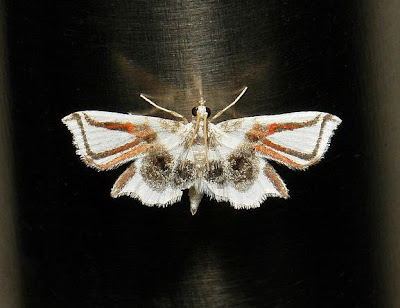 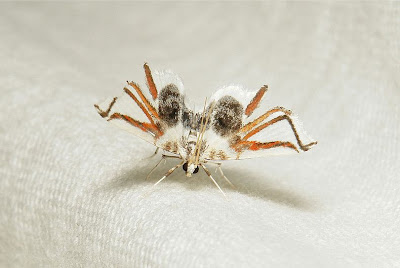 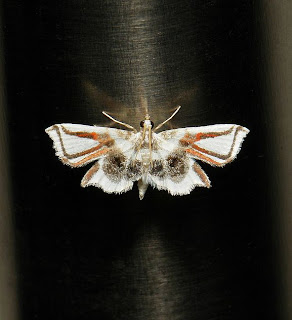 This recently described moth (originally from Thailand in 2005) is called the Lygodium Spider Moth because it feeds on Lygodium species, an invasive Old World climbing fern, and has markings that look like a spider (possibly mimicry to protect it from predators).

This moth has risen to significance because of it's appetite for the Lygodium ferns, which have developed as an invasive weed that threatens Florida's wetlands.

While there are many stem-boring moths, S. aranea is the first to be identified among fern-feeders in Asia. The moth is unique in a number of ways. For one, its caterpillar form looks more like some beetle larvae. The moth has armored segments on its rear similar to those on beetles but unlike anything seen before in a moth. And the adult moth may mimic spiders, a characteristic that has led to its scientific name, "aranea," as well as its unofficial moniker.

This discovery expands possibilities for biological control of the Old World climbing fern in the United States. The plant is not a pest in its native Australia, South and Southeast Asia, and Africa, perhaps because its enemies keep it in check there.