[Paleontology • 2019] Descriptive Anatomy of the Largest Known Specimen of Protoichthyosaurus prostaxalis (Reptilia: Ichthyosauria) including Computed Tomography and Digital Reconstruction of A Three-dimensional Skull

Abstract
Ichthyosaur fossils are abundant in Lower Jurassic sediments with nine genera found in the UK. In this paper, we describe the partial skeleton of a large ichthyosaur from the Lower Jurassic (lower Sinemurian) of Warwickshire, England, which was conserved and rearticulated to form the centrepiece of a new permanent gallery at the Thinktank, Birmingham Science Museum in 2015. The unusual three-dimensional preservation of the specimen permitted computed tomography (CT) scanning of individual braincase elements as well as the entire reassembled skull. This represents one of the first times that medical imaging and three-dimensional reconstruction methods have been applied to a large skull of a marine reptile. Data from these scans provide new anatomical information, such as the presence of branching vascular canals within the premaxilla and dentary, and an undescribed dorsal (quadrate) wing of the pterygoid hidden within matrix. Scanning also revealed areas of the skull that had been modelled in wood, clay and other materials after the specimen’s initial discovery, highlighting the utility of applying advanced imaging techniques to historical specimens. Additionally, the CT data served as the basis for a new three-dimensional reconstruction of the skull, in which minor damage was repaired and the preserved bones digitally rearticulated. Thus, for the first time a digital reconstruction of the skull and mandible of a large marine reptile skull is available. Museum records show the specimen was originally identified as an example of Ichthyosaurus communis but we identify this specimen as Protoichthyosaurus prostaxalis. The specimen features a skull nearly twice as long as any previously described specimen of P. prostaxalis, representing an individual with an estimated total body length between 3.2 and 4 m. 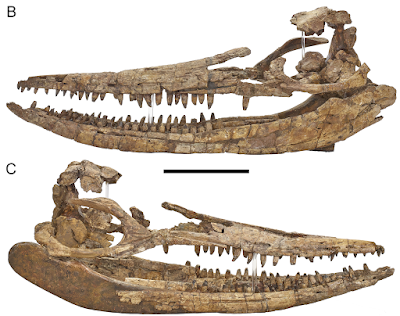 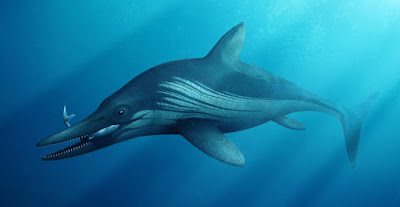 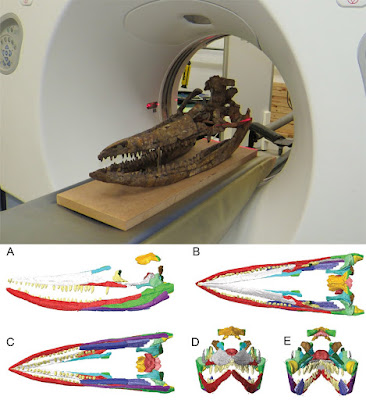 Conclusions:
In this study, we describe a large, partial ichthyosaur skeleton from the Early Jurassic of Warwickshire, England. In addition to examining the specimen, we carried out CT scanning of individual skull bones as well as the entire, reassembled skull, one of the first times the skull of a large marine reptile has been successfully CT-scanned, visualized and reconstructed in 3D (see McGowan, 1989; Foffa et al., 2014a). CT scanning contributed greatly to our anatomical description by revealing features not visible on original fossil material such as: branching, longitudinal vascular canals within the premaxilla and dentary; short canals penetrating the nasal, lacrimal, stapes and articular; trabecular bone within the opisthotic; canals in the basisphenoid and supraoccipital; the presence of the quadrate process of the pterygoid; and the sutural morphology. We also demonstrate the utility of applying medical imaging techniques to historic specimens to differentiate between original fossil material and reconstructed regions, as well as the advantage of using digital visualization to accurately reconstruct large fossil specimens in 3D.

The detailed description of the three-dimensional skull and braincase presented herein also provides information that can be used in phylogenetic studies. Although incomplete, the skull and braincase preserve various elements that have not previously been reported or described in any specimen of Protoichthyosaurus and therefore it provides more information about this taxon so that its phylogenetic position can be explored in more detail. Furthermore, our study has found additional characters that may lend further support for the distinction of Protoichthyosaurus from its sister taxon Ichthyosaurus, such as the morphology of the pterygoid and anteroventral surface of the parietal, which differ from that described for Ichthyosaurus (McGowan, 1973). However, considering that only a couple of specimens preserve these elements, it is possible that the differences may be the result of individual variation; more three-dimensional specimens of both taxa are needed to test and clarify these findings.

Based on a unique combination of characters, we identify the studied specimen as P. prostaxalis. With a skull nearly twice as long as any previously described specimen of P. prostaxalis, this specimen greatly increases the known size range of this genus. Compared with known, contemporaneous Sinemurian ichthyosaurs, the estimated size suggests it was larger than all species of Ichthyosaurus (Lomax & Sachs, 2017), and comparable with the largest known specimens of Leptonectes tenuirostris (McGowan, 1996a), but smaller than L. solei (McGowan, 1993), Excalibosaurus costini (McGowan, 2003) and Temnodontosaurus platyodon (McGowan, 1996b). Thus, our study also provides new information on ichthyosaur diversity and potential ecology in the Early Jurassic of the UK. 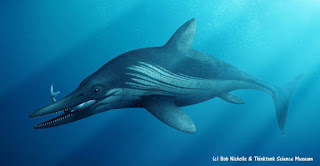