Abstract
We describe a new species of Enyalius endemic to the Brazilian Cerrado, based on morphological and molecular data sets. In the face of uncertain taxonomy among museum specimens of Enyalius, we used a novel analytical approach based on Gaussian mixture modeling for species assignments. We also used a machine-learning classification procedure (random forests) to investigate morphological variation and identify species diagnostic characters. Phylogenetic and species delimitation analyses supported the distinction of the new species from its congeners. The new species is characterized by the fewest ventral scales and smallest snout–vent length in the genus. Moreover, we infer that this species diverged from its closest relative, E. bilineatus, in the late Miocene, presumably after colonization of Cerrado gallery forests by an Atlantic Forest ancestor, followed by ecological or geographical speciation linked to shrinkage or fragmentation of gallery forests associated with global cooling and increased aridity. Rapid conversion of natural habitats, the isolation of protected areas, and recent changes to the Brazilian Forest Code pose serious threats to the conservation of the new species described herein, and other gallery forest inhabitants.

Etymology.— The specific epithet of this species is a Portuguese word that refers to Capetinga Creek, located in Fazenda Água Limpa, property of Universidade de Brasília, ~7 km SW of the type locality, where GRC collected the first specimens of Enyalius capetinga in November 1987. Capetinga is formed by the combination of the Tupinamba ́language (Tupi-Guarani) words‘‘kapi’’’(grass) and‘‘tinga’’(dry/white), meaning ‘‘dry grass.’’ We also chose this name for the resemblance with‘‘capeta,’’a Portuguese word for‘‘devil’’or‘‘bugbear.’’ Sometimes, while conducting our investigation and dealing with the complex interactions of academic life, we felt as if the capeta was coming to get us! 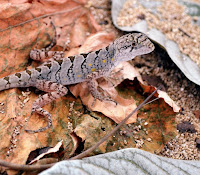