Abstract
The lungless salamanders of the tribe Bolitoglossini show notable diversification in the Neotropics, and through the use of molecular tools and/or new discoveries, the total number of species continues to increase. Mexico is home to a great number of bolitoglossines primarily distributed along the eastern, central, and southern mountain ranges where the genus Chiropterotriton occurs. This group is relatively small, with 16 described species, but there remains a considerable number of undescribed species, suggested by the use of molecular tools in the lab more than a decade ago. Most of these undescribed species are found in the state of Veracruz, an area characterized by diverse topography and high salamander richness. Described herein are two new species of Chiropterotriton based on molecular and morphological data. Both new species were found in bromeliads in cloud forests of central Veracruz and do not correspond to any previously proposed species. Phylogenetic reconstructions included two mitochondrial fragments (L2 and COI) and identified are two primary assemblages corresponding to northern and southern species distributions, concordant with previous studies. The two new species are closely related but morphologically and molecularly differentiated from other species of the C. chiropterus group.

Habitat and distribution. Western side of Sierra de Chiconquiaco, part of the Sierra Madre Oriental in central Veracruz. Specimens found in a cloud forest with extensive deforestation (near crops and paddocks), exclusively in arboreal bromeliads over oaks at 1,249 m asl (Figs. 5A and 5B).

Natural History. Chiropterotriton aureus was found exclusively in bromeliads in cloud forest around 1,200 m asl. Examined were approximately 40 bromeliads and found only five specimens, including four adults (one male and three females). Sampled bromeliads were at 1.5–3.0 m from the ground and small (approximately 20– 40 cm in diameter). Sampling site was disturbed and deforested, but adjacent zones with similar environmental conditions could be explored to delimit the distributional range of this species. Species possibly sympatric with C. aureus may be Aquiloeurycea cafetalera, Bolitoglossa platydactyla, Isthmura gigantea, Pseudoeurycea lynchi, and Thorius minydemus.

Etymology. Latin epithet aureus (feminine aurea, neuter aureus) is derived from “aurum” gold + derivational suffix “-eus,” meaning made of gold or gold in color, which is the featured characteristic color of the species.

Habitat and distribution. Eastern slopes of Cofre de Perote in central Veracruz among cloud forest between 1,520 and 2,023 m asl. Specimens found in arboreal bromeliads of cloud forest fragments with low or moderate disturbance of habitat. The majority of the specimens found were juveniles so the possibility of finding them in terrestrial environments (under cover objects) is not rejected (Figs. 5C and 5D). Two localities where C. nubilus occurs are within protected areas: municipal (La Cortadura) and the other under private ownership (Rancho Viejo).

Natural History. Chiropterotriton nubilus was exclusively found in bromeliads and six localities on the eastern slope of Cofre de Perote. Distribution could include a fragmented band along cloud forests from Coxmatla to Banderilla at 1,500–2,000 m asl. Samples included three collections in three study locations (Banderilla, La Cortadura, and Rancho Viejo) for a total of nine sampling events. Each sampling event applied 16 person-hours for a total sampling effort of 144 person-hours. In four of the nine sampling events collected were C. nubilus, varying between one to three specimens per sampling event. Bromeliads where C. nubilus were found measured 1.5–5.0 m from the ground and were medium in size (approximately 40–60 cm in diameter). Species found in sympatry with C. nubilus were Aquiloeurycea cafetalera, Parvimolge townsendi, Pseudoeurycea lynchi, and Thorius pennatulus. It is conceivable that C. nubilus could be found in sympatry with C. lavae because distributions converge at the W slope of Cofre de Perote at 2,000 m asl. However, C. lavae (La Joya) is found eight km away from the nearest location (Banderilla) C. nubilus occurs. 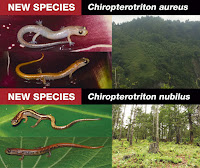