Abstract
Natural rain forest enclaves in northeastern Brazil (called Brejos de Altitude) are present in isolated areas surrounded by the semiarid Caatinga biome. Among these montane areas, the Araripe Plateau in Ceará state harbors Caatinga, Cerrado, and Atlantic Forest remnants and is considered a priority area for biodiversity conservation. Herein, we describe a new species of Proceratophrys (Amphibia: Anura: Odontophrynidae; Horned Frogs) endemic to the Araripe Plateau. Based on nuclear and mitochondrial DNA sequences, we show that this new species is related to the Amazonian species P. concavitympanum but can be diagnosed based on the row of tubercles on the forearm and by the number, size, and disposition of tubercles on the dorsal region. It is also widely disjunct, known only from the mesic forests of the Araripe Plateau, 2400 km away from the type locality of P. concavitympanum. The new species depends on streams for reproduction and is currently known from an area that is severely impacted by deforestation and diversion of local streams for agriculture and recreation. Considering the many threatened species occurring in the same region, there is a need for future studies to quantify the new species' full distribution and evaluate population trends to correctly assess its conservation status.

Etymology.—The Araripe Plateau spans the borders of Ceará, Pernambuco and Piauí states. ‘‘Araripe,’’ from the ancient tupi, ararype, means ‘‘on the Araras River’’ (arara, arara + ’y, river + pe, on the; Arara means Macaw in Tupi and in vernacular Portuguese). Because the new species is known only from the Araripe region, we name it after this area. The specific epithet ararype is treated as a noun in apposition 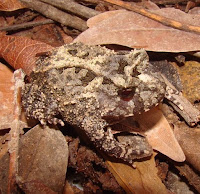