Abstract
Despite being recognized as ecologically and biogeographically important, the biodiversity of the Hengduan Mountain Region, particularly along the upper Mekong River, remains poorly understood. Here we describe a new species of Mountain Dragon of the genus Japalura sensu lato Gray, 1853 from the headwater region of the Mekong River in Chamdo, Tibet Autonomous Region, China. The species is recognized as a member of the Japalura flaviceps Barbour & Dunn 1919 complex, and it can be distinguished readily from all congeners by a suite of morphological characteristics, including its dwarf appearance (small body size and disproportionally short tails and short hind limbs), smooth or weakly keeled ventral scales, feebly developed vertebral crests in males, and by the absence of distinct gular spots in males and females. In addition to the description of the new species, we also report morphological variations and range extensions of two recently described congeners along the same river, namely J. iadina and J. vela. We discuss the distribution patterns of the genus in the Hengduan Mountain Region and the urgent conservation priorities for protecting Japalura species along the Mekong River. According to our best available data, we provided IUCN assessments of the three species and propos to list them as nationally protected under the Chinese Wildlife Protection Act.

Etymology. The species name, drukdaypo, was derived from the pronunciation of the Kham Tibetan word that means “dwarf dragon”, which describes the diagnostic dwarf-morphology of the new species. We name the new species using Kham Tibetan in honor of the local culture and people, as well as their positive impacts on wildlife conservation.
Suggested English common name is: Dwarf Mountain Dragon, and the suggested Chinese common name is .... (Pinying: Zhu Pan Xi). 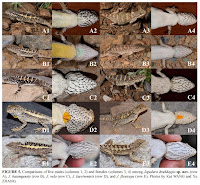 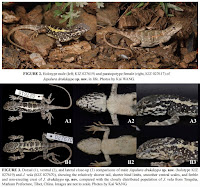 After almost two years, our manuscript finally gets published! A new species of dwarf Japalura sensu lato, Japalura drukdaypo (was still Japalura when we first submitted it, and now it should be Diploderma after our generic revision) from the upper Mekong River Valley in eastern Tibet, China. The species name, drukdaypo, is derived from Kham Tibetan, which means "dwarf dragon". 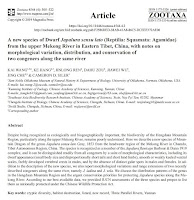