ABSTRACT
A new species of crayfish, Cambarus loughmani sp. nov., is described from the preglacial Teays River Valley of Cabell, Kanawha, Lincoln, Mason, and Putnam counties, West Virginia. The species was previously considered to be part of the Cambarus dubius complex. Loughman et al. restricted C. dubius to an orange colour morph found in central and northern portions of the Allegheny Mountains and Appalachian Plateau in central West Virginia, western Maryland, and south-central Pennsylvania. The new species described herein can be distinguished from all other members of Cambarus Erichson, 1846 by a double row of cristiform tubercles on the palm, an open areola with two rows of punctations, and a consistent blue colouration.

Etymology: The authors of this paper name this crayfish in honour of Dr Zachary J. Loughman, assistant professor of biology, West Liberty University. In recent years, prior to the naming of this species, Dr Loughman has served as one of the primary astacological researchers, contributing greatly to our understanding of ecology, taxonomy, conservation and distribution of Appalachian crayfish species. It is fitting that this crayfish be named in his honour, as both he and this crayfish are reclusive, hard to track down, and when faced with adversity never back down and often advance with arms flailing. The authors of this paper are composed of a mix of age classes. For the younger authors, Dr Loughman has served as a teacher, advisor and mentor. For the older authors he has served as a colleague, collaborator and student. For all of us, he has been a friend and an inspiration. Common name: The suggested common name for this species is Blue Teays Mudbug as it inhabits the Teays River Valley. 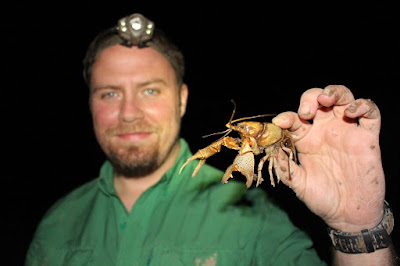