Abstract
Bruguiera × dungarra (Rhizophoraceae), a previously undescribed hybrid species between B. exaristata and B. gymnorhiza is recorded from north-east Australia. Eight taxa are currently recognised in this Indo West Pacific genus, including three putative hybrids. The newly described hybrid is widely occurring, and it is described here with notes provided on typification, phenology, distribution and habitat. A revised identification key to all Bruguiera taxa is presented, along with a table of comparative diagnostic characters. 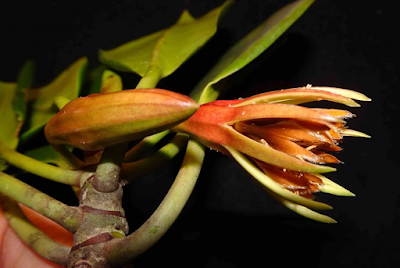 Etymology. The location of the type of this new hybrid occurs on the ancestral lands of the Yirrganydji people. For these traditional custodians of the narrow coastal strip from Cairns to Port Douglas, the epithet Dungarra means, ‘belonging to Machans Beach area’.

Distribution — Type location is Machans Beach, near Cairns in Queensland,Australia. Other localities include Holloways Beach also near Cairns in Queensland, Australia, south to around Hinchinbrook Channel and Shoalwater Bay, and further north to the Marrett River estuary in Princess Charlotte Bay. Distribution elsewhere is likely, although possibly restricted to the zone of overlap of putative parents (Fig. 3). Putative parent species co-occur in eastern Indonesia, Timor Leste, southern New Guinea and northern Australia. In Australia, B. × dungarra is likely to occur from Darwin Harbour in the Northern Territory to Port Curtis in Queensland. 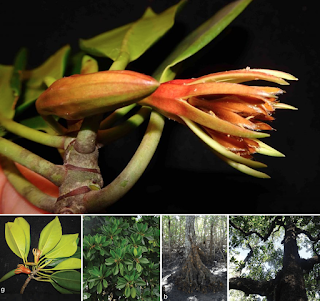 A Cairns-based citizen scientist has made yet another remarkable discovery.
jcu.edu.au/news/releases/2018/november2/citizen-scientists-third-remarkable-discovery