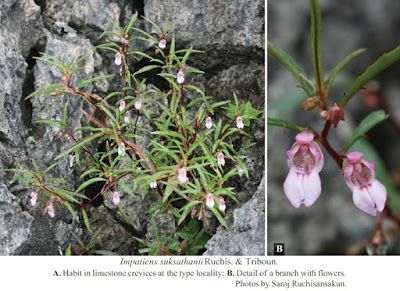 Abstract
Impatiens suksathanii Ruchis. & Triboun, a new species from a limestone area in Kanchanaburi Province in Southwestern Thailand, is described and illustrated. This endemic new species is clearly distinguished from the most similar I. namkatensis T.Shimizu by having sessile to very short petioles, linear, narrowly lanceolate to narrowly oblanceolate laminas, and pale pink flowers. Its conservation status is also assessed as Critically Endangered.

Proposed IUCN conservation assessment:— Critically Endangered (CR B2 ab(iii,v)) following the criteria of IUCN (2012). This species is only known from two small populations from two localities, neither of which currently has any formal protected status. One locality is in the grounds of a temple in Thong Phaphum district that receives a lot of visitors and the other one is in the grounds of a university. Moreover, the entire population is estimated to contain fewer than 100 individuals.

Etymology:— The plant is named in a honour of Dr. Piyakaset Suksathan, an outstanding plant taxonomist from Queen Sirikit Botanic Garden in Thailand who has been working on the family Balsaminaceae for the Flora of Thailand for a decade. He also encouraged the first author to start his phylogenetic study on the genus Impatiens for his Master’s degree. 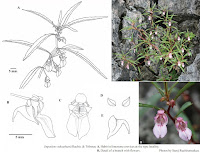