The exceptionally well-preserved Romanian dinosaur Balaur bondoc is the most complete theropod known to date from the Upper Cretaceous of Europe. Previous studies of this remarkable taxon have included its phylogenetic interpretation as an aberrant dromaeosaurid with velociraptorine affinities. However, Balaur displays a combination of both apparently plesiomorphic and derived bird-like characters. Here, we analyse those features in a phylogenetic revision and show how they challenge its referral to Dromaeosauridae. Our reanalysis of two distinct phylogenetic datasets focusing on basal paravian taxa supports the reinterpretation of Balaur as an avialan more crownward than Archaeopteryx but outside of Pygostylia, and as a flightless taxon within a paraphyletic assemblage of long-tailed birds. Our placement of Balaur within Avialae is not biased by character weighting. The placement among dromaeosaurids resulted in a suboptimal alternative that cannot be rejected based on the data to hand. Interpreted as a dromaeosaurid, Balaur has been assumed to be hypercarnivorous and predatory, exhibiting a peculiar morphology influenced by island endemism. However, a dromaeosaurid-like ecology is contradicted by several details of Balaur’s morphology, including the loss of a third functional manual digit, the non-ginglymoid distal end of metatarsal II, and a non-falciform ungual on the second pedal digit that lacks a prominent flexor tubercle. Conversely, an omnivorous ecology is better supported by Balaur’s morphology and is consistent with its phylogenetic placement within Avialae. Our reinterpretation of Balaur implies that a superficially dromaeosaurid-like taxon represents the enlarged, terrestrialised descendant of smaller and probably volant ancestors. 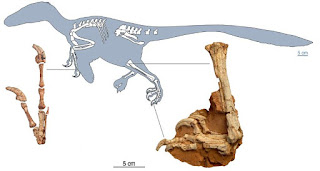