Brachycephalus (Anura: Brachycephalidae) is a remarkable genus of miniaturized frogs of the Brazilian Atlantic Rainforest. Many of its species are highly endemic to cloud forests, being found only on one or a few mountaintops. Such level of microendemism might be caused by their climatic tolerance to a narrow set of environmental conditions found only in montane regions. This restriction severely limits the chance of discovery of new species, given the difficulty of exploring these inaccessible habitats. Following extensive fieldwork in montane areas of the southern portion of the Atlantic Rainforest, in this study we describe seven new species of Brachycephalus from the states of Paraná and Santa Catarina, southern Brazil. These species can be distinguished from one another based on coloration and the level of rugosity of the skin in different parts of their body. These discoveries increase considerably the number of described species of Brachycephalus in southern Brazil. 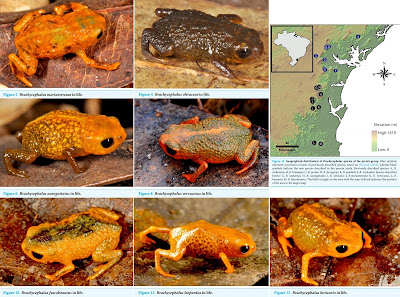