The origin and early evolution of turtles have long been major contentious issues in vertebrate zoology. This is due to conflicting character evidence from molecules and morphology and a lack of transitional fossils from the critical time interval. The ~220-million-year-old stem-turtle Odontochelys from China has a partly formed shell and many turtle-like features in its postcranial skeleton. Unlike the 214-million-year-old Proganochelys from Germany and Thailand, it retains marginal teeth and lacks a carapace. Odontochelys is separated by a large temporal gap from the ~260-million-year-old Eunotosaurus from South Africa, which has been hypothesized as the earliest stem-turtle. Here we report a new reptile, Pappochelys, that is structurally and chronologically intermediate between Eunotosaurus and Odontochelys and dates from the Middle Triassic period (~240 million years ago). The three taxa share anteroposteriorly broad trunk ribs that are T-shaped in cross-section and bear sculpturing, elongate dorsal vertebrae, and modified limb girdles. Pappochelys closely resembles Odontochelys in various features of the limb girdles. Unlike Odontochelys, it has a cuirass of robust paired gastralia in place of a plastron. Pappochelys provides new evidence that the plastron partly formed through serial fusion of gastralia. Its skull has small upper and ventrally open lower temporal fenestrae, supporting the hypothesis of diapsid affinities of turtles. 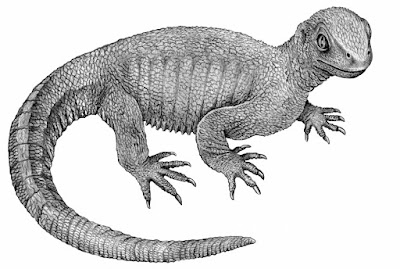 Etymology. In honour of I. Rosin, who prepared key specimens of the new taxon. 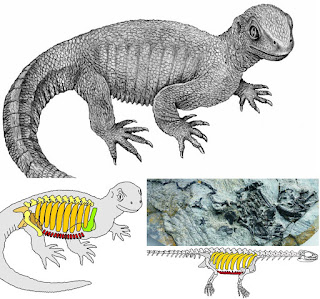 Hero in a half-formed shell: Turtle ancestor with bony belly unearthed
The fossil of Pappochelys, grew to around eight inches and lived along the shores of a lake in the Middle Jurassic period 240 million years ago. Palaeontologists say it was an early ancestor of modern turtles and the shape of its skull suggests these reptiles are more closely related to dinosaurs and birds than snakes
http://dailym.ai/1LuMuxJ via @MailOnline