Polar bears (Ursus maritimus) depend on sea ice, where they hunt ice-associated seals. However, they are opportunistic predators and scavengers with a long list of known prey species. Here we report from a small fjord in Svalbard, Norwegian High Arctic, a sighting of an adult male polar bear preying on two white-beaked dolphins (Lagenorhynchus albirostris) on 23 April 2014. This is the first record of this species as polar bear prey. White-beaked dolphins are frequent visitors to Svalbard waters in summer, but have not previously been reported this far north in early spring. We suggest they were trapped in the ice after strong northerly winds the days before, and possibly killed when forced to surface for air at a small opening in the ice. The bear had consumed most parts of one dolphin. When observed he was in the process of covering the mostly intact second dolphin with snow. Such caching behaviour is generally considered untypical of polar bears. During the following ice-free summer and autumn, at least seven different white-beaked dolphin carcasses were observed in or near the same area. We suggest, based on the area and the degree to which these dolphins had decayed, that they were likely from the same pod and also suffered death due to entrapment in the ice in April. At least six different polar bears were seen scavenging on the carcasses. 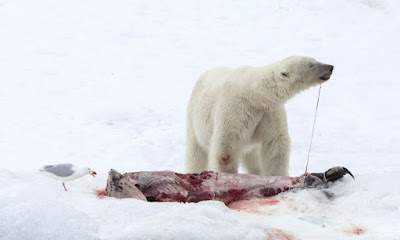