Summary
Ceratopsid (horned) dinosaurs are an iconic group of large-bodied, quadrupedal, herbivorous dinosaurs that evolved in the Late Cretaceous and were largely restricted to western North America. Ceratopsids are easily recognized by their cranial ornamentation in the form of nasal and postorbital horns and frill (capped by epiossifications); these structures show high morphological disparity and also represent the largest cranial display structures known to have evolved. Despite their restricted occurrence in time and space, this group has one of the best fossil records within Dinosauria, showing a rapid diversification in horn and frill morphology. Here a new genus and species of chasmosaurine ceratopsid is described based on a nearly complete and three-dimensionally preserved cranium recovered from the uppermost St. Mary River Formation (Maastrichtian) of southwestern Alberta. Regaliceratops peterhewsi gen. et sp. nov. exhibits many unique characters of the frill and is characterized by a large nasal horncore, small postorbital horncores, and massive parietal epiossifications. Cranial morphology, particularly the epiossifications, suggests close affinity with the late Campanian/early Maastrichian taxon Anchiceratops, as well as with the late Maastrichtian taxon Triceratops. A median epiparietal necessitates a reassessment of epiossification homology and results in a more resolved phylogeny. Most surprisingly, Regaliceratops exhibits a suite of cranial ornamentations that are superficially similar to Campanian centrosaurines, indicating both exploration of novel display morphospace in Chasmosaurinae, especially Maastrichtian forms, and convergent evolution in horn morphology with the recently extinct Centrosaurinae. This marks the first time that evolutionary convergence in horn-like display structures has been demonstrated between dinosaur clades, similar to those seen in fossil and extant mammals.

Diagnosis: as per the type and only species.

Etymology: Regaliceratops, from the Latin “regalis,” meaning “royal,” combined with the Greek “ceratops,” meaning “horned face.” The adjective “royal” refers to the crown-shaped parietosquamosal frill and epiossifications and the Royal Tyrrell Museum of Palaeontology (the “Royal” appellation was bestowed on the museum in 1990 by Her Majesty Queen Elizabeth II). The species epithet honors Peter Hews, who discovered the holotype.

Holotype: The holotype and only known specimen is Tyrrell Museum of Palaeontology (TMP) 2005.055.0001, a nearly complete cranium (skull excluding lower jaw) missing only the rostral bone. Palatal and braincase regions are obscured by matrix. 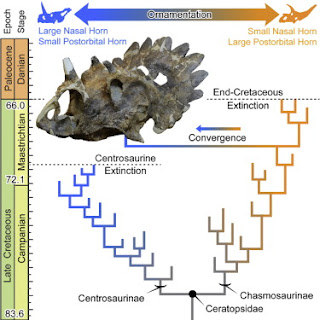 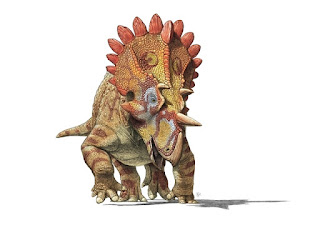 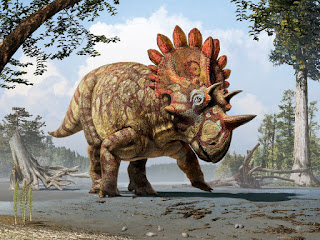 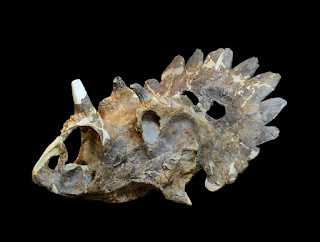