ABSTRACT
The effects of the direct interaction between hybridization and speciation-two major contrasting evolutionary processes-are poorly understood. We present here the evolutionary history of the Galápagos marine iguana (Amblyrhynchus cristatus) and reveal a case of incipient within-island speciation, which is paralleled by between-island hybridization. In-depth genome-wide analyses suggest that Amblyrhynchus diverged from its sister group, the Galápagos land iguanas, around 4.5 million years ago (Ma), but divergence among extant populations is exceedingly young (less than 50 000 years). Despite Amblyrhynchus appearing as a single long-branch species phylogenetically, we find strong population structure between islands, and one case of incipient speciation of sister lineages within the same island-ostensibly initiated by volcanic events. Hybridization between both lineages is exceedingly rare, yet frequent hybridization with migrants from nearby islands is evident. The contemporary snapshot provided by highly variable markers indicates that speciation events may have occurred throughout the evolutionary history of marine iguanas, though these events are not visible in the deeper phylogenetic trees. We hypothesize that the observed interplay of speciation and hybridization might be a mechanism by which local adaptations, generated by incipient speciation, can be absorbed into a common gene pool, thereby enhancing the evolutionary potential of the species as a whole. 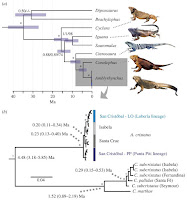 Hybridization (the merging of species) and speciation (the diversification of populations into species) are classically seen as opposing evolutionary processes. However, this study on Galapagos marine iguanas, the only seagoing lizard worldwide, offers novel insights into how these processes can act in concert. On San Cristóbal Island it was found that two resident populations of marine iguanas behave as distinct species from one another; they do not interbreed and they have morphological differences. This is the smallest island in which a speciation process in a highly mobile animal has been found. However these two populations also seem to breed freely with migrant iguanas from other Islands.

The research team believe that the combination of speciation between populations generates new adaptations and then hybridization between these populations absorbs those adaptations into a common genepool. This may enhance the evolutionary success of marine iguanas and help to explain their persistence on the archipelago (they are one of the oldest vertebrates of the Islands). However, the divergence between marine and land iguanas is far more recent than was previously thought, and it seems that they diverged around 4.5 million years ago which is about the same age as the oldest of the present Islands.