Abstract
A grapevine leafminer found recently in table grape orchards and vineyards in the Paarl region (Western Cape, South Africa) is described as Holocacista capensis sp. n. It has also been found on native Rhoicissus digitata and bred on that species in the laboratory. It is closely related to Holocacista salutans (Meyrick, 1921), comb. n. (from Antispila), described from Durban in KwaZulu-Natal, but widespread in southern Africa and a native leafminer of various Vitaceae: Rhoicissus tomentosa, R. digitata, R. tridentata and Cissus cornifolia. Holocacista capensis has been found on Vitis vinifera both in Gauteng and Western Cape, the earliest record being from 1950 in Pretoria. The initial host shift from native Vitaceae to Vitis must have occurred much earlier. The species is sometimes present in high densities, but hitherto no sizeable damage to the crops has been noted. 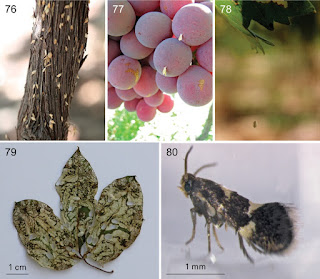