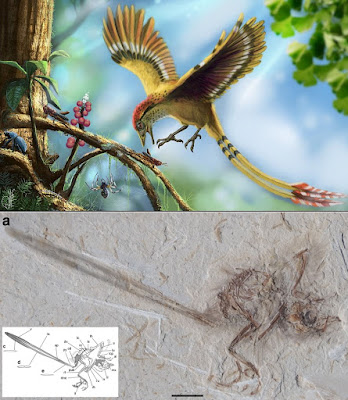 The fossil record of birds in the Mesozoic of Gondwana is mostly based on isolated and often poorly preserved specimens, none of which has preserved details on feather anatomy. We provide the description of a fossil bird represented by a skeleton with feathers from the Early Cretaceous of Gondwana (NE Brazil). The specimen sheds light on the homology and 3D structure of the rachis-dominated feathers, previously known from two-dimensional slabs. The rectrices exhibit a row of rounded spots, probably corresponding to some original colour pattern. The specimen supports the identification of the feather scapus as the rachis, which is notably robust and elliptical in cross-section. In spite of its juvenile nature, the tail plumage resembles the feathering of adult individuals of modern birds. Documentation of rachis-dominated tail in South American enantiornithines broadens the paleobiogeographic distribution of basal birds with this tail feather morphotype, up to now only reported from China. 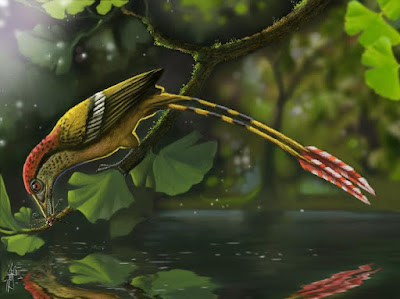 Referred material
UFRJ-DG (Universidade Federal do Rio de Janeiro, Department of Geology collection) 031 Av, partial skeleton of a possible juvenile specimen preserved in slab and counterslab, including poorly preserved skull bones, fore- and hindlimbs, portions of vertebral column, and most of both pectoral and pelvic girdles. The skeleton is exposed in lateral view, but the proximal caudal vertebrae and pygostyle are exposed dorsally. The same applies to the tail feathers, attached to the pygostyle.

The very small body size, large orbit, elongate caudal series, poorly developed proximal humerus and distal ends of other long bones (femur, tibia), as well as the lack of fusion in the metatarsus indicates that the specimen is probably a juvenile.

Locality and horizon
Pedra Branca Mine, Nova Olinda County, Ceará State, Brazil (7° 6′51.9″S, 39° 41′46.9″W). Araripe Basin, Crato Formation (Early Cretaceous, Aptian). This formation has yielded abundant and exceptionally preserved fossils of a large variety of plants and animals, representing one of the best well-known terrestrial ecosystems for the Early Cretaceous. Isolated feathers probably belonging to birds have been described from these beds, as well as succinct reports on avian skeletons associated with poorly preserved feathers. 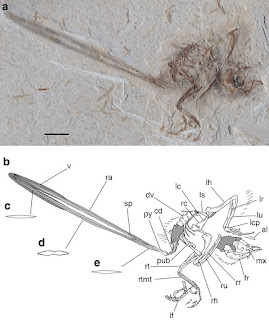