Two new species of large geckos in the genus Goniurosaurus are described based on specimens collected from karst areas of Guangxi Zhuang Autonomous Region, southern China: Goniurosaurus kadoorieorum sp. nov. and Goniurosaurus kwangsiensis sp. nov. Data on natural history of the new species are provided, as well as discussions on the current conservation status of Goniurosaurus species in southern China. Due to the popularity of this genus as novelty pets, and recurring cases of scientific descriptions driving herpetofauna to near-extinction by commercial collectors, we do not disclose the collecting localities of these restricted-range species in this publication. However, such information has been presented to relevant government agencies, and is available upon request by fellow scientists. 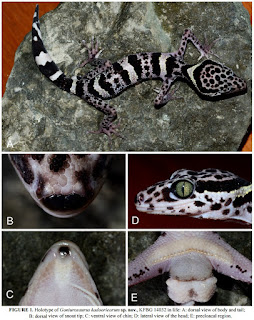 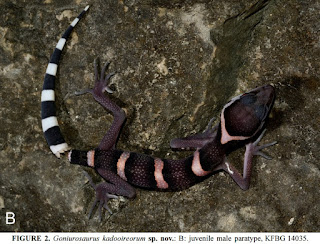 Etymology. The new species, “kadoorieorum”, is named in honour of the Kadoorie brothers, Sir Horace and Lord Lawrence, from Hong Kong, for their life-long support to biodiversity research and conservation in the region. As a common name we suggest “Kadoories’ Cave Gecko”.

Natural history and distribution. Goniurosaurus kadoorieorum sp. nov. is currently only known from its type locality in Guangxi Zhuang Autonomous Region in southern China. The new species appears to be a nocturnal karst specialist; all individuals were found amongst limestone rocks in karst forest at night. 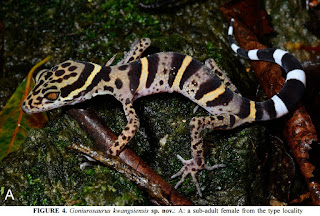 Etymology. The specific epithet “kwangsiensis” is named after its type locality, Guangxi Zhuang Autonomous Region, China (Kwangsi is the former official name of Guangxi). For the common name, we suggest “Guangxi Cave Gecko”.

Natural history and distribution. Specimens of the new species were found in karst forest at night. A total of nine individuals were found including four adult females, four adult males and one sub-adult; four were collected and assigned as the type series. A gravid adult female containing three well-developed eggs was among the nine seen but not collected. Three eggshells, most likely of G. kwangsiensis sp. nov., were also found in a rock crevice. Sympatric herpetofauna recorded in the locality during the survey included Asian Common Toad Duttaphrynus melanostictus (Schneider), King Cobra Ophiophagus Hannah (Cantor), and White-spotted Slug Snake Pareas
margaricophorus (Jan).