Abstract
A new species of freshwater crab, Potamonautes isimangaliso sp. n., is described from the western shores of False Bay, Hluhluwe, within the iSimangaliso Wetland Park, South Africa. While bearing a superficial resemblance to P. lividus, the new species has been found to be genetically distinct, diverging from the former by 7.4–7.8% in mtDNA. Potamonautes isimangaliso most closely resembles P. lividus, but is distinguished by a unique suite of carapace characters, colouration, and size. The new species also lives in close association with oxygen-poor, fresh ephemeral pans, while the habitat of P. lividus is well above the surface water line of the closest water body. An updated identification key for the Potamonautes species of South Africa is provided. 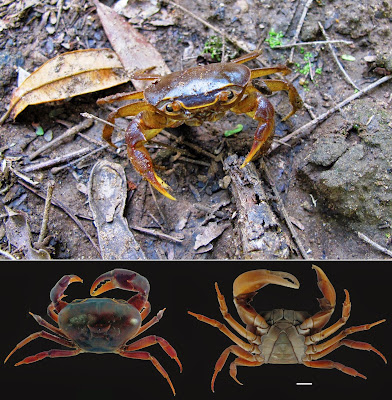 Distribution: Currently only known from the False Bay region of the iSimangaliso Wetland Park on the north-east coast of South Africa.

Etymology: The species is named after the iSimangaliso Wetland Park, located in northern KwaZulu-Natal, where it is currently thought to be micro-endemic. This is significant as the iSimangaliso Wetland Park falls within the Maputaland centre of endemism (Smith et al. 2008), highlighting the importance of this park as a global biodiversity hotspot. The Park is a UNESCO World Heritage Site and contains three Ramsar Wetlands of International Importance.