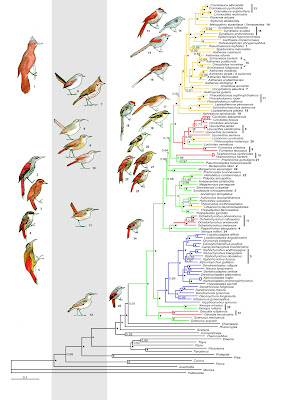 Phylogenetic relationships of the ovenbird-woodcreeper clade

Abstract
Background
The Neotropical ovenbird-woodcreeper family (Furnariidae) is an avian group characterized by exceptionally diverse ecomorphological adaptations. For instance, members of the family are known to construct nests of a remarkable variety. This offers a unique opportunity to examine whether changes in nest design, accompanied by expansions into new habitats, facilitates diversification. We present a multi-gene phylogeny and age estimates for the ovenbird-woodcreeper family and use these results to estimate the degree of convergent evolution in both phenotype and habitat utilisation. Furthermore, we discuss whether variation in species richness among ovenbird clades could be explained by differences in clade-specific diversification rates, and whether these rates differ among lineages with different nesting habits. In addition, the systematic positions of some enigmatic ovenbird taxa and the postulated monophyly of some species-rich genera are evaluated.

Results
The phylogenetic results reveal new examples of convergent evolution and show that ovenbirds have independently colonized open habitats at least six times. The calculated age estimates suggest that the ovenbird-woodcreeper family started to diverge at ca 33 Mya, and that the timing of habitat shifts into open environments may be correlated with the aridification of South America during the last 15 My. The results also show that observed large differences in species richness among clades can be explained by a substantial variation in net diversification rates. The synallaxines, which generally are adapted to dry habitats and build exposed vegetative nests, had the highest diversification rate of all major furnariid clades.

Conclusion
Several key features may have played an important role for the radiation and evolution of convergent phenotypes in the ovenbird-woodcreeper family. Our results suggest that changes in nest building strategy and adaptation to novel habitats may have played an important role in a diversification that included multiple radiations into more open and bushy environments. The synallaxines were found to have had a particularly high diversification rate, which may be explained by their ability to build exposed vegetative nests and thus to expand into a variety of novel habitats that emerged during a period of cooling and aridification in South America.