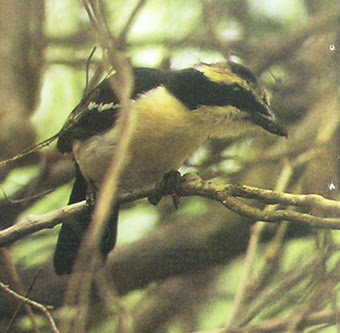 Abstract
Laniarius is one of the larger genera within the avian bush-shrike radiation, the family Malaconotidae. Fairly homogenous by size and shape but highly variable by colours, these have been classified mainly on basis of plumage colours. In the present study, which is the first taxon-dense analysis of the genus Laniarius based on molecular sequence data (nuclear BRM15 intron-15, and mitochondrial ND2 and ATPase6 genes), we investigate interrelationships between 16 species and 34 subspecies of Laniarius. Altogether 2094 bp were aligned and subjected to maximum likelihood and Bayesian inference analyses. Results strongly support the monophyly of Laniarius, and place it close to Chlorophoneus, but without outlining a precise sister-group. In a generally well-resolved phylogeny of Laniarius, L. leucorhynchus and L. atrococcineus constitute deep branches and the remaining species form five clades which are not concordant with previously defined superspecies. The black and white boubous belong to two different clades. L. aethiopicus appears polyphyletic and our results support the resurrection of Laniarius major, Laniarius erlangeri and Laniarius sublacteus. We also find that L. liberatus, described in 1991 based on the only known live individual, is identified as an unusual colour morph from L. erlangeri. The black boubous are not monophyletic; L. funebris and L. leucorhynchus appear as isolated species whereas L. poensis and L. fuelleborni are sister-taxa. We recovered the polyphyly of crimson boubous and new hypotheses on their relationships have been generated. Overall, the variation in pigments and patterns does not follow phylogenetic lineages. The plumage coloration could be thoroughly subject to modification and it could not reflect exactly colour plumages of the parents. From then on, the plumage coloration appears as an unreliable morphological character for defining species and species groups.

Abstract
A new species of bush-shrike is described on the basis of the only known individual. The bird was captured in a disturbed Acacia thicket near the town of Bulo Burti by the Shabeelle River in central Somalia. Believed to represent a species near extinction, the bird was kept alive, studied in captivity and then released. The type material comprises moulted feathers, blood samples and DNA extracted from feather quills. For comparison, DNA from other bush-shrikes was obtained from old museum skins and three live birds. Comparisons of base sequences from the cyt-b gene of mitochondrial DNA support the judgement that the bird represents a full species and is not a colour morph or hybrid of examined taxa. This procedure confirms that, in situations where collecting is not desirable, tissue from live individuals can be used to define taxa, and for comparisons with DNA from museum specimens of other taxa.