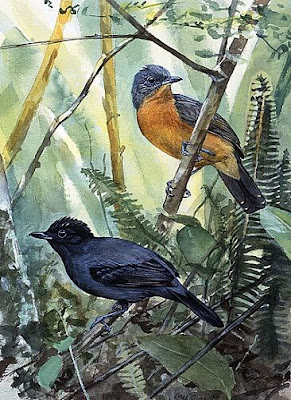 Acre Antshrike Pair (1998)
Thamnophilus divisorius, new species.
Description: 'Acre Antshrike Pair' was used as a cover painting for 'The Auk' to illustrate the paper describing this as a new species (Vol121, No.4, Oct. 2004, Whitney, Oren, and Brumfield). The bird has a small range on the border of Peru and Brazil.

Abstract
We describe a new species of Thamnophilus antshrike — T. divisorius (Acre Antshrike) — from the Serra do Divisor of Acre, Brazil. The new species is known from a single small ridge (though we expect that it is present on other, unexplored ridges in the Acre Arch uplands), and is common in the interior of shrubby woodlands on poor soil physiognomically similar to white-sand habitats in the Guianas and Amazonia. Thamnophilus divisorius is sister to T. insignis (Streak-backed Antshrike), a narrow endemic of pantepui, and forms a wellsupported clade with that species and T. amazonicus (Amazonian Antshrike). Thamnophilus divisorius occurs in a remote region within a national park in Brazil; despite its limited range, we are optimistic about its future survival.