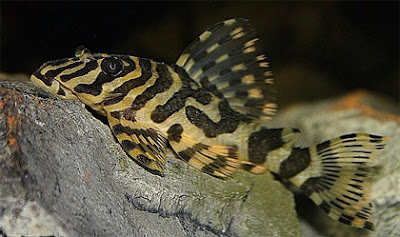 Abstract
The loricariid genus Peckoltia currently encompasses 13 valid species ranging throughout the Amazon basin in Brazil, Venezuela, Colombia, Peru, and Guyanas. Peckoltia is included in the tribe Ancistrini, but its relationships with other taxa within the tribe are not well established. In this paper we describe a new species of Peckoltia from the rio Tapajós drainage, Pará State, Brazil. Peckoltia compta, new species, is characterized by a bold color pattern consisting of large dark transversal bars on body and thick longitudinal dark stripes on snout and head. The new species is most similar in color pattern to P. vittata but can be distinguished from all its congeners by the presence of a pale line inside each dark stripe running from the snout tip to anterior margin of eyes (vs. absence of such clear lines and a mottled appearance in P. vittata, and a mix of vermiculations and spots on the head of the remaining congeners). A brief discussion on the taxonomic status of the nominal species Peckoltia vittata is also presented.