[Herpetology • 2003] Hyloscirtus tapichalaca • A new treefrog (Hylidae: Hyla) from Southern Ecuador and a description of its antipredator behavior 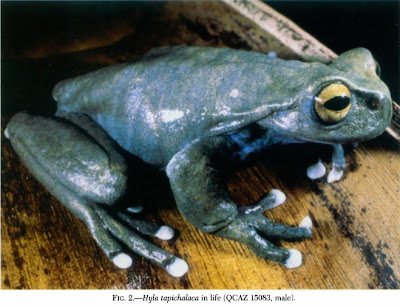 We describe a new species of Hyla from southern Ecuador that is diagnosed by the absence of an omosternum; the presence of an enlarged, curved, and pointed prepollex in males; features of coloration; and an associated suite of presumed anti-predator behaviors. Upon capture, frogs exuded a white, sticky fluid; continued perturbation elicited a defensive posture in which white patches on the posterior sides of the limbs and the vent were displayed. The phylogenetic relationships of H. tapichalaca with respect to the H. armata, H. larinopygion, and H. pulchella groups are discussed.

Etymology.- The  specific  epithet  is  an indeclinable word based on the  name of the protected forest where all known specimens were collected. Reserva Biologica Tapichalaca is owned by Fundacion  Jocotoco and was created to  protect the  habitat of  rare birds, including  the Jocotoco Antpitta, Grallaria ridgelyi (Krabbe et al., 1999), which is known only from this region. 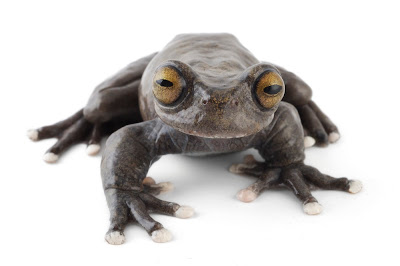 Distribution and ecology.- Hyla  tapichalaca  is  known  only  from  the  type  locality, a small cascading stream in  Montane Cloud Forest (Valencia et al., 1999) in the Nudo de Sabanilla. Annual mean precipitation in  this  region is  1000-2000  mm  and annual mean  temperature  is  12-18  C  (Cafiadas-Cruz, 1983).
The geographic distribution of H. tapichalaca is between that the H. Iarinopygion group (Colombia and  Ecuador), H.  armata  group (central Peru to central Bolivia), and Andean members of  the  H. pulchella group (central Peru to  central Argentina) (Duellman  et  al., 1997). Despite  their relatively large size  and striking color patterns, species in these groups are  not  commonly  encountered,  in  part, because  their  calls  are  barely  audible  over stream  noise  (Duellman  and  Hillis,  1990). Indeed,  all  species  in  the  H.  larinopygion group  (sensu  Duellman  and  Hillis,  1990; Duellman  et  al.,  1997) have become  known in the last 30 yr (Duellman, 1973). Given that H. armata is phylogenetically nested within the H. larinopygion group (Duellman et al., 1997; Paredes-Recalde,  1999),  it  seems  likely that focused efforts might reveal additional species of related frogs in the Andes of northern and central Peru. 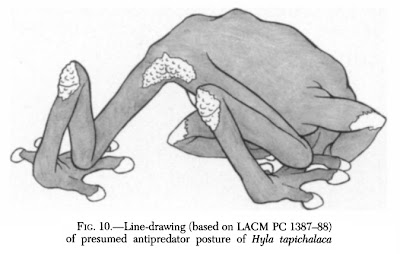 "...If scars are correlated with the antipredator posture, then the behavior described for H. tapichalaca might also be exhibited by other species of the H. larinopygion and H. pulchella groups."