[Botany • 2001] Kaisupeea • a new genus of Gesneriaceae centred in Thailand 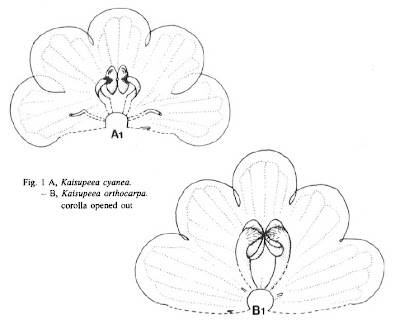 
The genus Kaisupeea is established for Boea herbacea, a species long recognised as being out of place in Boea, and two new species closely allied to it. These plants produce annual flowering stems whose basal leaves may be represented by broad foliaceous cataphylls. Kaisupeea herbacea and K. cyanea have spirally twisted fruit-valves, but those of K. orthocarpa are straight. Kaisupeea ranges from Moulmein in Burma [Mawlamyne in Myanmnar] eastwards across Thailand to Bassac on the Mekong river in lower Laos and south to the neighbourhood of Satun on the south coast of Thailand just north of the Malaysian border.

Etymology: The name is an amalgamation of the forenames of the Danish/Thailand botanists Kai and Supee Larsen. 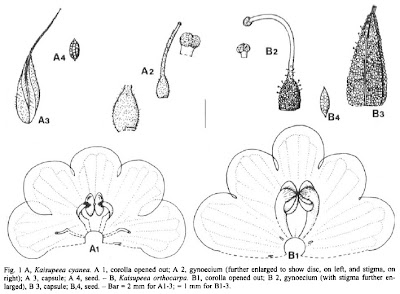 Notes: The genus is remarkable for the perennial habit with annual stems. Kaisupeea herbacea dies down to the ground in the unfavourable season, and no new leaves appear above ground until favourable conditions return. Then there appear, not normal foliage leaves, but light green expanded leaf-bases, that have presumably been covering the new bud underground; this soon bursts through and produces a flowering stem whose leaves diminish quickly upwards as do the axillary inflorescences so that the whole forms a terminal thyrse about 0.5 m high. Details of this regime deserve study in the field.“ (Burtt 1998: 3). 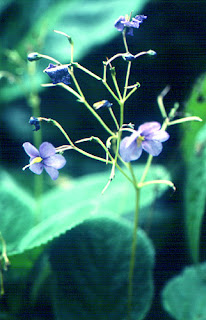