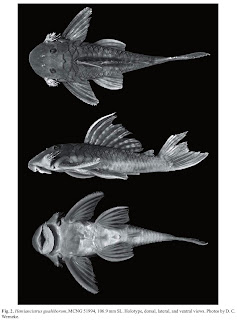 Etymology. Named for the Guahibo, a tribe of people inhabiting parts of southern Venezuela and western Colombia for the help some members of the tribe provided in collecting specimens in the upper río Ventuari.

Discussion:
Hemiancistrus guahiborum is one of the most common ancistrins in the upper Orinoco River basin. It is found in both granitic and lateritic rocky habitats with flow, where it was caught in abundance. Hemiancistrus guahiborum feeds by scraping periphyton and ingesting both the sediment matrix deposited from the water column, and attached algae and benthic macroinvertebrates. Other loricariids commonly collected with H. guahiborum were Hypostomus squalinus, Hemiancistrus subviridis, Peckoltia sabaji, and P. aff vittata. Although the range of H. guahiborum encompasses a region where loricariids are intensively harvested for the ornamental fish trade and it is one of the most abundant loricariids in the area, it is not commonly exported. Despite its often quite attractive appearance when alive, it is typically passed over by fishermen seeking the more strikingly colored species with which it is sympatric.