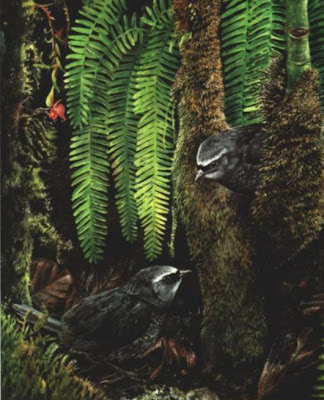 Abstract
In  Bolivia  in  1992  I  tape-recorded  and  observed  several  individuals  of  an undescribed  tapaculo  of  the  systematically  complex  genus  Scytalopus in  humid-temperate forest  near  the  city  of  La  Paz.  During  March  1993,  Bolivian  colleagues  and  I  collected  a series of  the undescribed  taxon  from  two  geographically  distinct  regions  of  Depto.  La  Paz, and  confirmed  its  presence  as  far  south  as  Prov.  Chapare,  Depto.  Cochabamba.  The  new species, the  Diademed  Tapaculo  (Scytalopus schulenbergi), is described  and  its distribution and  vocalizations  are  compared  with  some  other  members  of  the  genus,  mostly  in  Bolivia. I reexamine  systematics  of  the magellanicus  group  and,  based  primarily  upon  striking  and consistent  vocal  differences  across  the  North  Peruvian  Low  in  northwestern  Peru,  I  recommend  its division  into  two  superspecies with  the  names magellanicus  (southern  populations)  and griseicollis  (northern  populations). 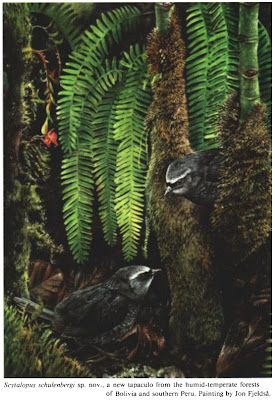