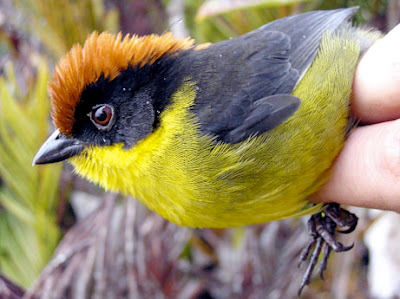 Etymology: Our name honours the Yariguíes indigenous people and the massif that bears their name, expressed as a fifth declension feminine Latin noun yariguies, and declined in the genitive plural. Serranía de los Yariguíes is often labelled on maps as Serranía de los Cobardes (Mountains of the cowards), which derives from the colonial era. The Yariguíes people resisted the Spanish, although was doomed to fail in the face of a technologically superior military power. Rather than submit, the Yariguíes committed mass suicide. The Spanish viewed this not as an act of dignity, but of cowardice. Colombian governmental agencies and NGOs are endeavouring to remove the insult from official materials, and Serranía de los Yariguíes is now the preferred name. The region is rich in archaeological sites and indigenous art, which to date have gone largely unrecognised due to the historic security situation and difficulty of access. 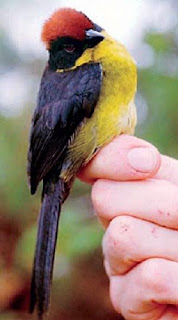 A new bird to science was recently discovered on an unexplored mountain range in northern Columbia by a team supported by the BP Conservation Programme. It was named "Yariguies Brush-Finch," with the scientific name Atlapetes latinuchus yariguierum. (Image courtesy of Conservation International) 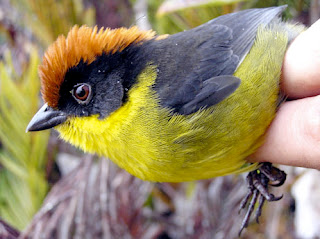