A new species of the Parachute Gecko, Ptychozoon bannaense sp. nov., is described on the basis of two specimens from Xishuangbanna, Yunnan Province, China. The new species can be distinguished from eight known congeners by the following combination of morphological characters: body size moderate, SVL 83.2–87.5 mm; rostral with a short dorsomedian groove; dorsal head and body covered with granular scales without enlarged tubercles, but male with several enlarged tubercles on the occipital region; two supranasals separated from each other by a large internasal; the absence of a predigital notch in the preantebrachial cutaneous flap; male possesses 17 preanofemoral pores in a continuous scale row; tail tubercle absent, 24 pairs of lateral denticulate cutaneous lobes of the tail; width of tail and caudal lobes progressively decreasing posteriorly; the terminal caudal flap short, semicircle, not expanded; lack of lobe fusion at the terminal caudal flap border; the presence of four dark dorsal bands between fore- and hind limbs insertions, the third and fourth dorsal bands fused into a X-shaped mark. The new species is also divergent from known taxa in mitochondrial gene sequences, supporting its recognition based on morphological characters. The discovery and description of Ptychozoon bannaense brings the total number of Ptychozoon to nine, and represents the first record of the genus Ptychozoon in China.

Diagnosis. Ptychozoon bannaense sp. nov. can be diagnosed by the combination of the following characters: (1) body size moderate, SVL 83.2 and 87.5 mm for two specimens; (2) rostral with a short dorsomedian groove; (3) dorsum of head and body covered with granular scales without enlarged tubercles, but male with several enlarged tubercles on the occipital region; (4) supranasals separated from each other by a large internasal; (5) predigital notch in preantebrachial cutaneous flap absent; (6) digits of hands and feet strongly webbed; (7) male possesses 17 preanofemoral pores in a continuous row; (8) the tail with 24 pairs of lateral denticulate cutaneous lobes, ending in a small terminal cutaneous flap; (9) width of tail and caudal lobes progressively decreasing posteriorly; (10) lack of lobe fusion at the terminal caudal flap border; (11) tail tubercle absent; (12) four dark dorsal bands between fore- and hind limbs insertions, the third and fourth dorsal bands fused into an X-shaped mark. 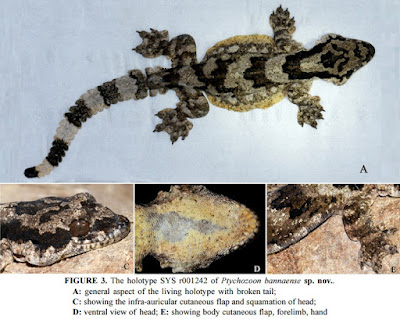 Etymology. The specific epithet “bannaense” refers to the type locality, Xishuangbanna, which is usually referred to as “Banna” in Chinese. In the local aboriginal language, the “Xishuang” means “twelve”, the “Banna” means “a small administrative district”. We propose the English vernacular name “Banna Parachute Gecko” and the Chinese vernacular name “Banna San Hu”. 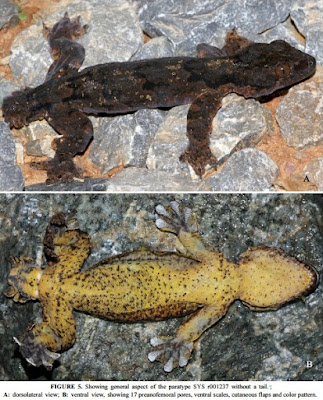 Distribution, ecological notes and behavior. Currently, Ptychozoon bannaense sp. nov. has only been recorded from Xishuangbanna Dai Autonomous Prefecture, Yunnan Province, China. The paratype (SYS r001237), lacked a tail, was difficult to discern from its surroundings and was captured at 0:25 a.m.on the surface of a road within a moist tropical rainforest. The next night, three adult individuals with original tails, including the holotype (SYS r001242), were simultaneously discovered at about 22:00 on the branches of a tall tree (3 m dbh)at heights between 13–14 m. The tree was very close (2 m) to the collection site of the paratype and about 10 m from a nearby stream (see Fig. 6). The color pattern of these individuals perfectly matched the mottled tree bark, and they could be detected only by noting their occasional slowly crawling movements along the branches. After disturbance from a long bamboo pole, one individual (SYS r001242) parachuted from a height of 13 m to another tree trunk. During this directed areal descent, its cutaneous flaps and digital webbings expanded, limbs were stretched out, tail was held out straight, and mouth was held open, while it travelled in a descending arc for a horizontal distance of 2.5 m, and a vertical distance of about 10 m. 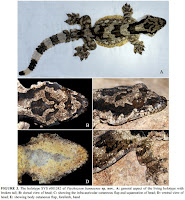