[Ichthyology • 2016] Microplecostomus forestii • Description of A New Catfish Genus (Siluriformes, Loricariidae) from the Tocantins River Basin in central Brazil, with Comments on the Historical Zoogeography of the New Taxon

Abstract
This study presents the description of a new genus of the catfish subfamily Neoplecostominae from the Tocantins River basin. It can be distinguished from other neoplecostomine genera by the presence of (1) three hypertrophied bicuspid odontodes on the lateral portion of the body (character apparently present in mature males); (2) a large area without odontodes around the snout; (3) a post-dorsal ridge on the caudal peduncle; (4) a straight tooth series in the dentary and premaxillary rows; (5) the absence of abdominal plates; (6) a conspicuous series of enlarged papillae just posterior to the dentary teeth; and (7) caudal peduncle ellipsoid in cross section. We used maximum likelihood and Bayesian methods to estimate a time-calibrated tree with the published data on 116 loricariid species using one nuclear and three mitochondrial genes, and we used parametric biogeographic analyses (DEC and DECj models) to estimate ancestral geographic ranges and to infer the colonization routes of the new genus and the other neoplecostomines in the Tocantins River and the hydrographic systems of southeastern Brazil. Our phylogenetic results indicate that the new genus and species is a sister taxon of all the other members of the Neoplecostominae, originating during the Eocene at 47.5 Mya (32.7–64.5 Mya 95% HPD). The present distribution of the new genus and other neoplecostomines may be the result of a historical connection between the drainage basins of the Paraguay and Paraná rivers and the Amazon basin, mainly through headwater captures.

Diagnosis: The new genus and species differs from all members of the Loricariidae by having (1) three hypertrophied bicuspid odontodes on the lateral portion of the body (character apparently present only in mature males – observed in the holotype, but not present in the paratypes) (Fig. 2a, b); and differs from all members of the Neoplecostominae by having (2) a large area without odontodes around the snout, observed in all specimens, Fig. 3 (vs. margin of snout bearing odontodes); and from all members of the Neoplecostominae, except Hirtella carinata Pereira, Zanata, Cetra & Reis, 2014, Pareiorhina carrancas Bockmann & Ribeiro, 2003 and Pareiorhina hyptiorhachis Silva, Roxo & Oliveira, 2013 by (3) the presence of a post-dorsal ridge on the caudal peduncle, see dorsal view of holotype in Figs 1, 4 (vs. the absence of a post-dorsal ridge). Microplecostomus forestii sp. n. differs from species of the genera Isbrueckerichthys, Neoplecostomus and Pseudotocinclus by (4) the absence of abdominal plates, Fig. 1 (vs. abdomen covered by pentagonal or hexagonal platelets); from Kronichthys by having (5) the tooth series in dentary and premaxillary rows straight (vs. tooth series strongly curved medially); from Neoplecostomus by (6) the absence of a conspicuous series of enlarged papillae just posterior to the dentary teeth (vs. presence of enlarged papillae); and from Pseudotocinclus by having (7) the caudal peduncle ellipsoid in cross section (vs. caudal peduncle square in cross-section).

Etymology: The specific name, forestii, is given in honor of Fausto Foresti, Professor of the university of São Paulo state “Júlio de Mesquita Filho” (Unesp) in Brazil, for his contributions to fish genetics, with more than 250 papers published in this field.

Distribution: Microplecostomus forestii sp. n. is known from two localities, the Roncador Stream and the das Brancas Stream, both tributaries of the Tocantizinho River, in the Tocantins basin (Fig. 7a).

Habitat: Microplecostomus forestii sp. n. was collected in shallow, clear waters of about 0.5 m in depth and fast-flowing currents, with an underlying substrate of rock, in areas of flat terrain. The fishes captured were associated with pebbles (Fig. 7b, c). This species is relatively hard to collect and is not abundant. In seven expeditions to the Roncador and das Brancas streams in different periods of the year, we were able to collect only 16 specimens. Microplecostomus forestii sp. n. is sympatric with species such as Creagrutus sp., Rhinolekos capetinga Roxo, Ochoa, Silva & Oliveira, 2015, Hypostomus sp., Phenacorhamdia sp., Ancistrus sp., and Ituglanis sp. 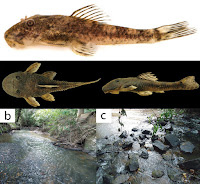 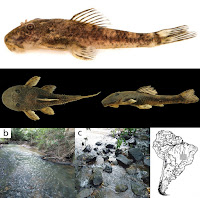