Oberholzeria etendekaensis, a succulent biennial or short-lived perennial shrublet is described as a new species, and a new monotypic genus. Discovered in 2012, it is a rare species known only from a single locality in the Kaokoveld Centre of Plant Endemism, north-western Namibia. Phylogenetic analyses of molecular sequence data from the plastid matK gene resolves Oberholzeria as the sister group to the Genisteae clade while data from the nuclear rDNA ITS region showed that it is sister to a clade comprising both the Crotalarieae and Genisteae clades. Morphological characters diagnostic of the new genus include: 1) succulent stems with woody remains; 2) pinnately trifoliolate, fleshy leaves; 3) monadelphous stamens in a sheath that is fused above; 4) dimorphic anthers with five long, basifixed anthers alternating with five short, dorsifixed anthers, and 5) pendent, membranous, one-seeded, laterally flattened, slightly inflated but indehiscent fruits.

Distribution, habitat and ecology: Oberholzeria etendekaensis is known from a single population (comprising two small subpopulations) in the Kaokoveld Centre of Endemism, a biogeographical region rich in restricted-range plants and animals [32], in north-western Namibia (Fig. 2). Its only known locality is from the Great Escarpment, in the Etendeka Mountains, on the watershed between the Khumib and Hoarusib Rivers, ± 50 km from the Atlantic coast at elevations ranging from 850–950 m. Average annual rainfall is around 100 mm and the substrate is derived from basalt of the Etendeka Group, Karoo Supergroup [33]. Oberholzeria etendekaensis is rare and has only been found in one location. It grows in two south-facing ravines (two subpopulations), approximately 500 m apart, in association with another succulent, Euphorbia pergracilis Meyer [34], also a restricted-range species. It is found on stony soil and scree in small colonies of usually less than ten plants each, in full sun (Fig. 1).

Flowering occurs in April and May; this follows the end of the main rainy season (late summer).

Conservation status: Although rare and localised, O. etendekaensis does not appear to be threatened at present. No signs of browsing by livestock or game were noticed and plants seem to be healthy and occur in an area unpopulated or sparsely populated by humans.

Etymology: Johanna Allettha Oberholzer [1965–], beloved and venerated wife of the first author, is commemorated in the genus name. Known as Hannelie, she proposed that this specific part of the Etendeka Mountains be explored, accompanied the expedition during which the new species was discovered and first saw and brought the plants to the attention of one of us (WS). The specific epithet refers to the Etendeka Mountains, the type locality of the new species. 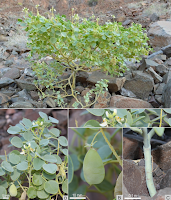