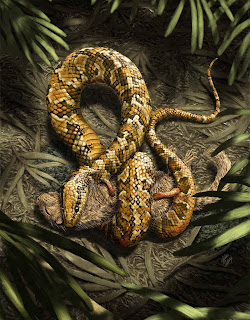 Snakes are a remarkably diverse and successful group today, but their evolutionary origins are obscure. The discovery of snakes with two legs has shed light on the transition from lizards to snakes, but no snake has been described with four limbs, and the ecology of early snakes is poorly known. We describe a four-limbed snake from the Early Cretaceous (Aptian) Crato Formation of Brazil. The snake has a serpentiform body plan with an elongate trunk, short tail, and large ventral scales suggesting characteristic serpentine locomotion, yet retains small prehensile limbs. Skull and body proportions as well as reduced neural spines indicate fossorial adaptation, suggesting that snakes evolved from burrowing rather than marine ancestors. Hooked teeth, an intramandibular joint, a flexible spine capable of constricting prey, and the presence of vertebrate remains in the guts indicate that this species preyed on vertebrates and that snakes made the transition to carnivory early in their history. The structure of the limbs suggests that they were adapted for grasping, either to seize prey or as claspers during mating. Together with a diverse fauna of basal snakes from the Cretaceous of South America, Africa, and India, this snake suggests that crown Serpentes originated in Gondwana. 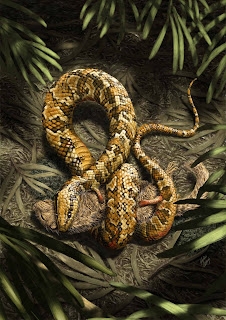