Abstract
Macaca fascicularis aurea (Mfa) is the only macaque which has been recorded to use stone tools to access encased foods. They live in close contact with M. fascicularis fascicularis (Mff) in southwestern Thailand and the hybrids were reported [Fooden, 1995]. Although Mff and Mfa can be seen in the same habitat types, tool-use behavior has never been reported in Mff. Thus, comparing the morphological characteristics and genetics between Mfa and Mff should help elucidate not only the morphological differences and genetic divergence between these subspecies but also potentially the relationship between genetics and their tool use behavior. We surveyed Mfa and Mff in Myanmar and Thailand, ranging from 16° 58′ to 7° 12′ N. Fecal or blood samples were collected from eight, five, and four populations of Mfa, Mff, and Mff × Mfa morphological hybrids along with three individuals of captive Chinese M. mulatta (Mm), respectively, for mtDNA and Y-chromosome (TSPY and SRY genes) DNA sequence analyses. In addition, eight populations were captured and measured for 38 somatometric dimensions. Comparison of the somatic measurements revealed that Mfa had a statistically significantly shorter tail than Mff (P < 0.05). Based on the mtDNA sequences, Mfa was separated from the Mm/Mff clade. Within the Mfa clade, the mainland Myanmar population was separate from the Mergui Archipelago and Thailand Andaman seacoast populations. All the morphological hybrids had the Mff mtDNA haplotype. Based on the Y-chromosome sequences, the three major clades of Mm/Indochinese Mff, Sundaic Mff, and Mfa were constructed. The hybrid populations grouped either with the Mm/Indochinese Mff or with the Mfa. Regarding the genetic analysis, one subspecies hybrid population in Thailand (KRI) elicited tool use behavior, thus the potential role of genetics in tool use behavior is raised in addition to the environmental force, morphological suitability, and cognitive capability. 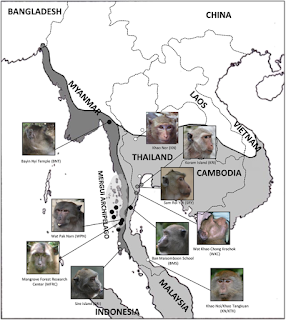