Abstract
The Whip snakes of the genus Dolechophis in Iraq are distributed in various habitats. Two species of jagularis species group was known in Iraq. Depending on great variation in color pattern and ventral scale count, a new form discovered, because of its distribution along the upper Mesopotamia we named it Dolichophis mesopotamicus sp. nov. The study supported by figures and distribution map. 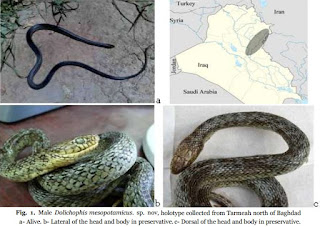 Habitat and distribution: Bushes and vegetation around the rivers, manmade lakes and ponds for fish cultures. It is sympatric with Dolichophis jugularis asiana in most of the known distribution for Iraq.

Behavior: These diurnal snakes have interesting behavior in their capability of moving the eyes anterior and posterior, up and down.