ABSTRACT
Brachiosaurid sauropods achieved a broad distribution during the Late Jurassic, which has been considered to provide evidence of their origins during the Middle Jurassic, prior to the breakup of Pangea. In contrast to their broad geographic distribution during the Late Jurassic, formally named brachiosaurid species from the Cretaceous have so far been restricted to the Aptian–Albian of North America, which has been interpreted as a signal of differential extinction and/or a bias in the Early Cretaceous fossil record. Here we describe a new brachiosaurid titanosauriform taxon from the Early Cretaceous of Colombia, which is represented by axial elements. The material was recovered from marine sediments of the Paja Formation (Barremian), close to the locality of Villa de Leiva. The weakly laterally expanded and divided transverse processes of the anterior-most caudal vertebrae allows the recognition of a new sauropod taxon, Padillasaurus leivaensis, gen. et sp. nov. In order to test the phylogenetic relationships of the new taxon, we performed a cladistic analysis that recovered Padillasaurus as a brachiosaurid titanosauriform. This position is supported by a combination of characters, including the presence of blind fossae in anterior caudal vertebrae. Among titanosauriforms, the presence of blind fossae in anterior caudal vertebrae is an apomorphic character that is exclusive to Giraffatitan, Venenosaurus, Cedarosaurus, and Abydosaurus. Although more complete remains are needed to test more thoroughly the affinities of the new taxon, the available evidence indicates that brachiosaurids survived at lower latitudes in Gondwana until at least the Early Cretaceous. 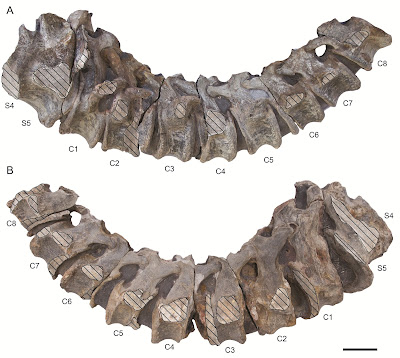 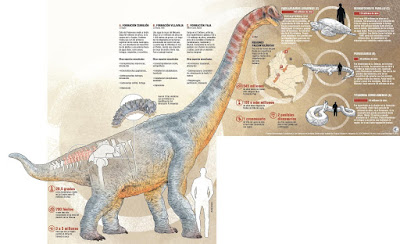 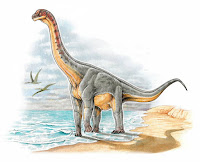