Anurans show the highest diversity in reproductive modes of all vertebrate taxa, with a variety of associated breeding behaviours. One striking feature of anuran reproduction is amplexus. During this process, in which the male clasps the female, both individuals’ cloacae are juxtaposed to ensure successful external fertilization. Several types of amplexus have evolved with the diversification of anurans, and secondary loss of amplexus has been reported in a few distantly related taxa. Within Nyctibatrachus, a genus endemic to the Western Ghats of India, normal axillary amplexus, a complete loss of amplexus, and intermediate forms of amplexus have all been suggested to occur, but many species remain unstudied. Here, we describe the reproductive behaviour of N. humayuni, including a new type of amplexus. The dorsal straddle, here defined as a loose form of contact in which the male sits on the dorsum of the female prior to oviposition but without clasping her, is previously unreported for anurans. When compared to known amplexus types, it most closely resembles the form of amplexus observed in Mantellinae. Furthermore, we prove that, opposed to the situation in most anurans, male semen release happens before egg deposition. We hypothesize that the male ejaculates on the female’s dorsum and that sperm subsequently runs from her back and hind legs before fertilizing the eggs. A second feature characterizing anuran breeding is the advertisement call, mostly produced solely by males. Despite recent descriptions of several new Nyctibatrachus species, few studies have explored their vocal repertoire. We describe both the male advertisement call and a female call for N. humayuni. The presence of a female call has not been reported within Nyctibatrachidae, and has been reported in less than 0.5% of anuran species. Altogether, our results highlight a striking diversity and several unique aspects of Nyctibatrachus breeding behaviour. 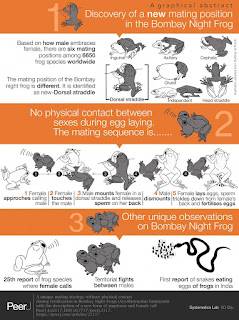 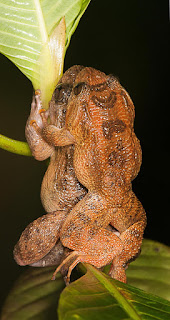 Conclusion
The breeding behaviour of Nyctibatrachus humayuni has several unique elements: a new type of amplexus, the release of semen before oviposition and the presence of a female call. These findings further highlight the tremendous variation present in the reproductive behaviour of anuran amphibians. Nyctibatrachus frogs are one of several unique taxa in the Western Ghats biodiversity hotspot, which is heavily threatened by anthropogenic activities (Myers et al., 2000; Bossuyt et al., 2004; Van Bocxlaer et al., 2012). A good understanding of each species’ ecology, including reproduction, is of major importance for planning and successfully implementing conservation strategies. Additional studies further exploring the unique and diverse behaviour in Nyctibatrachus frogs are, therefore, badly needed. Special attention should be paid to describing the amplexus type, determining the moment of fertilization and assessing the presence and function of female calling behaviour. 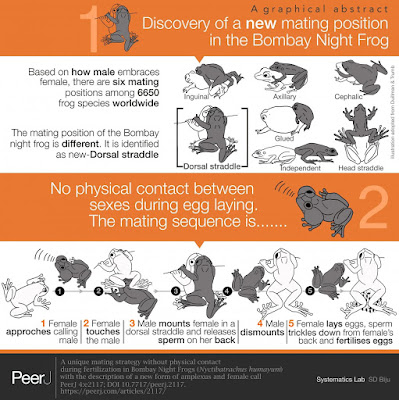 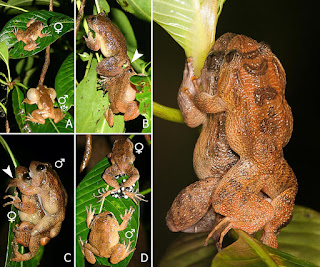 Discovery of a new mating position (the 7th to be discovered) in frogs.
http://bit.ly/25KopKM via @ThePeerJ @EurekAlertAAAS