Abstract
A new species of Hechtia from the Mexican State of Tamaulipas is herein proposed as new: Hechtia hernandez-sandovalii, which is known only from the municipality of Villa de Miquihuana in the southwestern portion of the state. The new species is easily recognized by the following combination of characters: its white cotton-like indument (turning brownish with age) on the branches, rachis, and peduncle of both staminate and pistillate inflorescences. The new taxon is compared with H. glomerata, a species morphologically similar.

Etymology:— We dedicate this species to Luis G. Hernández Sandoval who collected the type material of this new species.

IUCN   Conservation   assessment:— VU. Hechtia hernandez-sandovalii meets criteria D2 of the IUCN (2001). The species is known from an area of less than 2 km2 within which it occurs only at a handful of small sites. Albeit local populations of the species can be rich in individuals and are often inaccessible, they are widely dispersed and isolated on the slopes and tops of small hills. 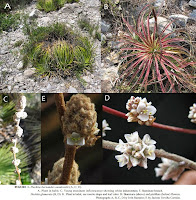