We describe a new digitless scincid lizard of the genus Brachymeles from northern Luzon and Camiguin Norte islands in the Philippines. This species belongs to the Brachymeles bonitae Complex, and both molecular and morphological data confirm that this species is distinct from all other congeners. Formerly considered to be a single widespread species, this group of species has been the focus of recent systematic reviews. Here we describe a new species in the B. bonitae Complex, recognized currently to constitute five species. Brachymeles ilocandia sp. nov. is the second digitless and the seventeenth non-pentadactyl species in genus. The description of this species brings the total number of species in the genus to 40, and provides new insight into unique distribution patterns of species of the northern Philippines. 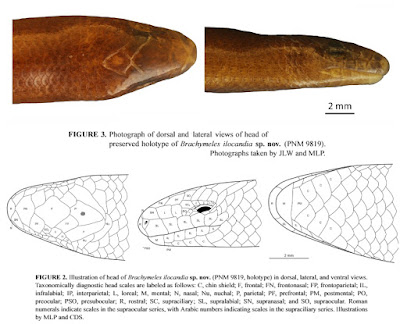 Distribution, ecology and natural history. Brachymeles ilocandia sp. nov. is known only from northern Luzon and Camiguin Norte islands (Fig. 1A). The new species likely once occurred in low- to mid-elevation primary forest habitats; however, all recent observations of this species have occurred in secondary growth forest habitats. In contrast to the other members of the B. bonitae Complex, this species appears to be quite common in secondary growth forest fragments throughout the northern Philippines.  Brachymeles ilocandia sp. nov. is found in parts of its distribution with B. bicolor, B. kadwa, and B. boulengeri. Other species of Brachymeles known to occur in the Luzon PAIC include B. bicolandia, B. bonitae, B. brevidactylus, B. cobos, B. elerae, B. isangdaliri, B. kadwa, B. lukbani, B. makusog, B. minimus, B. muntingkamay, and B. wrighti (Davis et al. 2014).

We have evaluated this species against the International Union for Conservation of Nature (IUCN) criteria for classification and find that it does not qualify for Critically Endangered, Endangered, Vulnerable, or Near Threatened status. Not only does B. ilocandia sp. nov. occur on more than one island, but also the species appears common in secondary growth and disturbed habitats throughout its recognized distribution. Therefore, we recommend that this species be classified as Least Concern, LC (IUCN 2015).

Etymology. The specific epithet is chosen in reference to the biogeographically and culturally distinct homeland, “Ilocandia”, of the Ilokano people of the northern Philippines, the third largest ethnolinguistic group in the country. Including the Babuyan Island Group north of Luzon Island, Ilocandia stretches from the western coast of northern Luzon, across the Cagayan Valley, to parts of central Luzon and the boundaries of Aurora Province in the east. The region is home to many endemic vertebrates, diverse geographic landscape, unique local cuisine, and rich cultural traditions. Suggested common name: Ilokano Slender Skink.