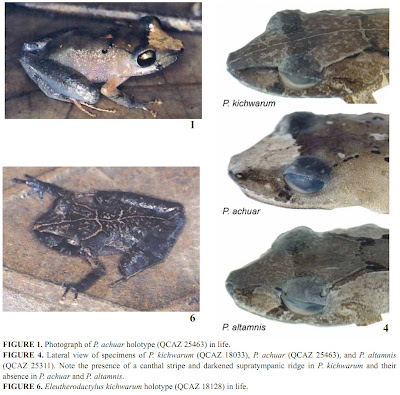 Abstract
We describe three new species of Pristimantis leaflitter frogs from the upper Amazon basin of Ecuador: Pristimantis achuar, Pristimantis altamnis, and Pristimantis kichwarum. Each of these new species was previously considered to be part of a single species, formerly known as Eleutherodactylus ockendeni (Boulenger) morph B. However, analysis of DNA sequences together with examination of the morphology of more than 600 specimens from Ecuador reveals that multiple species were confused under the same name. The morphological differences among the three new species are subtle but consistent: presence or absence of a black canthal stripe and/or supratympanic ridge, snout-vent length, and ventral colouration. The three species are generally allopatric and geographically restricted, although at some localities two of the species occur sympatrically.

Etymology:— This species is named for the Achuar indigenous nation of the upper Amazon basin, who are ardent protectors of their biodiversity and generously granted permission to KRE to sample frogs from their land at Kapawi Lodge. The epithet is a noun in apposition.

Natural History:— Individuals were found in primary forest and presumably can also be found in secondary forest. By night they were often perched on the leaves of low vegetation from 0.2 to 1.3 m elevation. By day they were found in the leaflitter.

Distribution:— Pristimantis achuar is found in the lowlands of the Pastaza and Napo rivers in southern Ecuador (see Fig. 5). The species is probably more widely distributed into northern Peru.

Etymology:— This species is named for the swift headwater rivers of the Amazon River, since it is found at localities near the origins of Ecuador’s major rivers (Napo, Pastaza, and Aguarico). The name is a compound adjective of the Latin “altus” for upper and “amnis” for river.

Natural history:— Individuals were found in primary and secondary forest. By night they are often perched on the leaves of low vegetation. By day they were found in leaflitter. 18

Distribution:— Pristimantis altamnis has been found throughout the humid upland tropical forests of eastern Ecuador, at elevations of approximately 400–1000 masl (see Fig. 5). To the east it is replaced by P. kichwarum or P. achuar. Its range limits to the north and south are not known. In the upper Napo River area (Jatun Sacha Biological Station), P. altamnis has been found sympatrically with P. kichwarum.

Etymology:— This species is named for the indigenous Kichwa communities in the Oriente of Ecuador. They are recognized in this small collective way as a token of appreciation for the engagement of individuals and communities in this research, and for sharing their biodiversity and knowledge. The patronym is a Latin feminine plural genitive of the nation name.

Distribution:— Pristimantis kichwarum has been found throughout the humid tropical forests of eastern lowlands of Ecuador in the Napo, Orellana, and Sucumbíos provinces, at elevations of approximately 500 masl and below (see Fig. 5). The extent of its distribution to the east and north is not known. The species is apparently replaced by P. achuar to the south in the Pastaza basin. In the upper regions of the Napo River (Jatun Sacha Biological Station), P. kichwarum has been found sympatrically with P. altamnis. 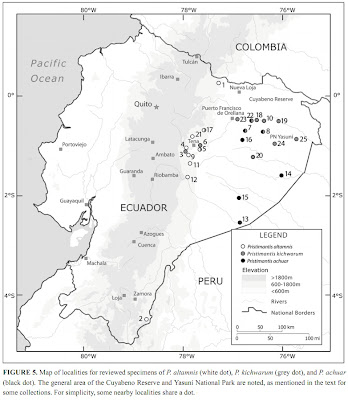