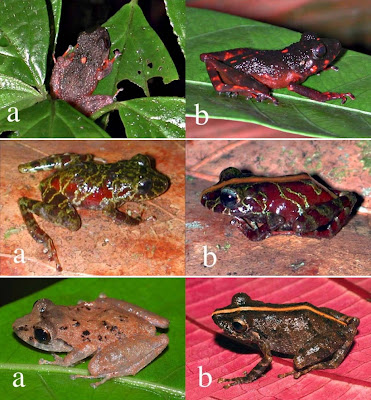 Abstract
Three new species of rainfrogs of the genus Pristimantis are described from a large mesa (tepui), the Wokomung Massif, of the Pakaraima Mountains in west-central Guyana. Pristimantis dendrobatoides n. sp. is known from 1385–1411 m, P. jester n. sp. from 1411–1650 m, and P. saltissimus n. sp. from 698–1560 m elevation. The three species are syntopic at elevations around 1400 m in cloud forest. All three taxa are unusual among species of Pristimantis in the production of malodorous and distasteful skin secretions when handled, conditions that are atypical for the genus. Two of the new species (P. dendrobatoides, P. jester) also have bright, red skin coloration, and the third (P. saltissimus) is either cryptically colored or brightly colored. 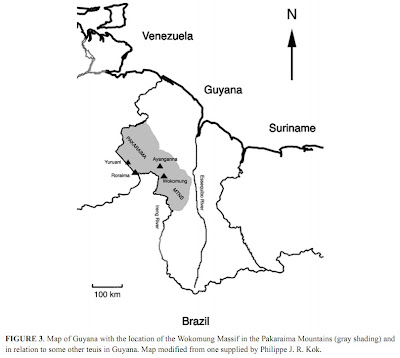 FIGURE 3. Map of Guyana with the location of the Wokomung Massif in the Pakaraima Mountains (gray shading) and in relation to some other teuis in Guyana. Map modified from one supplied by Philippe J. R. Kok. 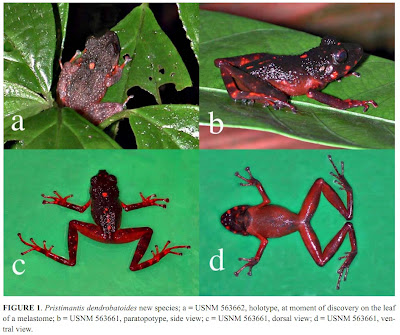 Etymology. The name dendrobatoides refers to the general resemblance of these frogs to toxic members of the genus Dendrobates (Greek dendron = tree + bates = one who walks) and Greek oides = resembling. That the new species is malodorous and likely has noxious or toxic skin secretions (see Discussion) adds weight to the selection of this name.

Two new species of the Pristimantis unistrigatus Group
The two new taxa described below are referred to the Pristimantis unistrigatus group as recognized by Lynch and Duellman (1997) by having a coarsely areolate venter, Finger I shorter than Finger II, and Toe III much shorter than Toe V, with the latter extending to the level of the distal subarticular tubercle on Toe IV when adpressed to that toe. Ten recognized species of the Pristimantis unistrigatus group are known from the Guiana Shield (Senaris and MacCulloch 2005), three are informally referred to as sp. 1, sp. 2, and sp. 4 by Lescure and Marty (2000), and two others are being described from Suriname (Savage, Watling, and Donnelly, MS). The two new species differ from nine of these in lacking basal webbing on the toes which is present in P. cantitans (Myers and Donnelly, 1996), P. inguinalis (Parker, 1940), P. marmoratus (Boulenger, 1900), P. ockendeni (Boulenger, 1912), P. yaviensis (Myers and Donnelly, 1996), sp. 1 and sp. 4 of Lescure and Marty (2000) and the two as yet undescribed new Suriname species of Savage, Watling, and Donnelly (MS). 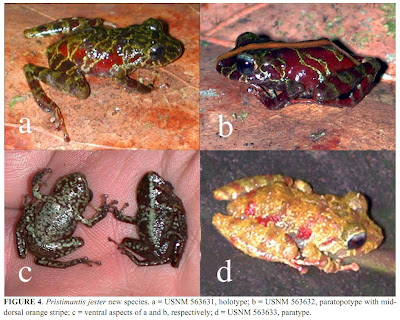 Etymology. The name jester is to be treated as a noun in apposition. By implication the name refers to the brilliant red and green dorsal coloration of this species that is reminiscent of the garb of a medieval court jester. 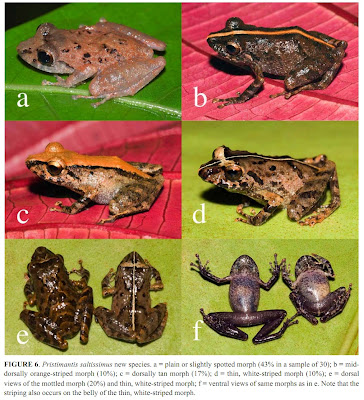 from the Wokomung Massif, near Falls Camp, Potaro-Siparuni District, west-central Guyana
Etymology. The name is from the Latin salto (to jump) + the superlative issimus in reference to the extreme jumping ability of this diminutive frog. In the field it was called the rocket frog.