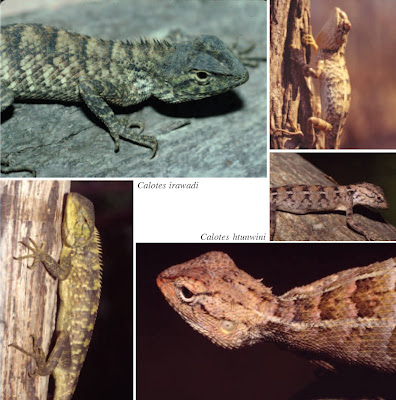 The Burmese garden lizards represent a complex of several species. DNA sequence and morphological analyses reveal that two species occur sympatrically in the Central Dry Zone of Myanmar. These two new species are described herein. Additionally, the molecular data demonstrate that Calotes versicolor represents multiple species and at least two clades: one from India-Myanmar and another from Myanmar-Southeast Asia. The morphological investigation does not currently recognize unique trait(s) for each clade, but it does establish a set of morphometric, scalation, and quantitative coloration traits that permit statistical comparison of intra and interpopulational variation in the versicolor species group. 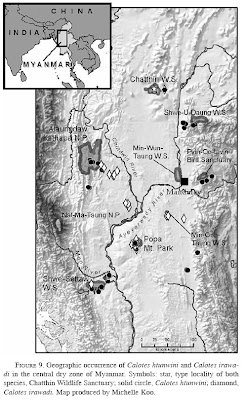 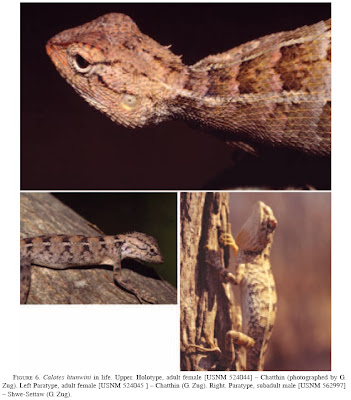 Calotes htunwini Zug and Vindum
ETYMOLOGY.— We name this species in fond memory of Htun Win and to honor him for his contribution to Burmese herpetology. Htun Win grew up in Chatthin village and joined the Chatthin Wildlife Sanctuary in January 1993 as a day-worker and was appointed as a NWCD forester in January 1995. He began his herpetological work as the team leader of GZ’s Chatthin W.S. herpetofauna monitoring-inventory project in August 1997 and then became the leader of our CAS-NWCD-SI Herpetological Survey team in November 1999. His commitment to our survey project and his expanding knowledge of the Burmese herpetofauna were major factors for the success of the survey. He became ill while surveying the herpetofauna of Kachin State and died in June 2004. The epithet is proposed as a noun in apposition.
DISTRIBUTION AND NATURAL HISTORY.— Calotes htunwini occurs throughout the lower elevations of Myanmar’s Central Dry Zone (Fig. 9). It is represented by vouchers from Chatthin W.S. southward to Shwe-Settaw W.S. and from Alaungdaw Kathapa N.P. eastward to the base of the Shan Plateau in the vicinity of Mandalay. Our field notes indicate that C. htunwini is a forest lizard. At Chatthin, it occurs within the indaing forest. At Shwe-Settaw, it co-occurs with C. irawadi in the scrubby woodland bordering the Namada River. It was also found along a dry forest stream in the center of of the Shwe-Settaw reserve. At Popa and AK, the field notes are inadequate to differentiate between in forest and roadside-agricultural habitats. All the preceding forest records are of open forest, commonly with a scattered grass understory. 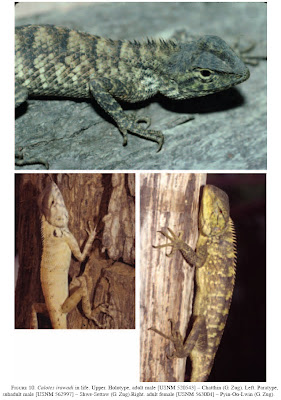 Calotes irawadi Zug, Brown, Schulte, and Vindum
ETYMOLOGY.— Irawadi is a variant spelling of Ayeyarwaddy and is used as a noun in apposition. Our use of Irawadi refers to the broad distribution of this species in the central portion of the Ayeyarwaddy River basin.
DISTRIBUTION AND NATURAL HISTORY.— Of the two new taxa, Calotes irawadi has the broadest occurrence in Myanmar’s Central Dry Zone (Fig. 9). It is represented by vouchers from Chatthin W.S. southward to Shwe-Settaw W.S. and from mid-elevations at Alaungdaw Kathapa N.P. eastward to edge of the Shan Plateau at Pyin-Oo-Lwin (approx. 1000 m elevation). Field observations indicate that C. irawadi is an open-forest lizard but also persists in fence-row habitats and cut-over woodland. Where it co-occurs with C. htunwini at Shwe-Settaw, the “forested” habitat is patches of secondary growth scrub 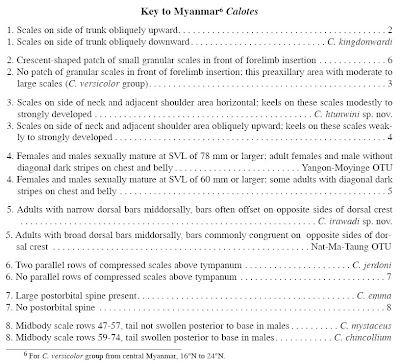