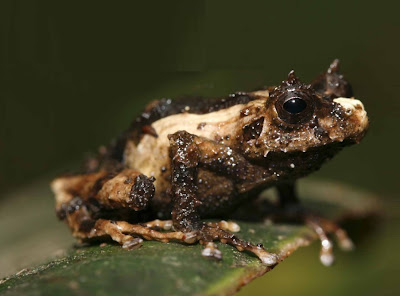 Abstract
We describe a new species of frog, Pristimantis leucorrhinus sp. nov., from the Cordillera Yanachaga, Yanachaga Chemillén National Park, on the eastern slopes of the Andes in Central Peru. The new species belongs to the P. unistrigatus group and is characterized by the absence of a tympanum, the presence of horn-like tubercles on upper eyelids and a characteristic colour pattern. 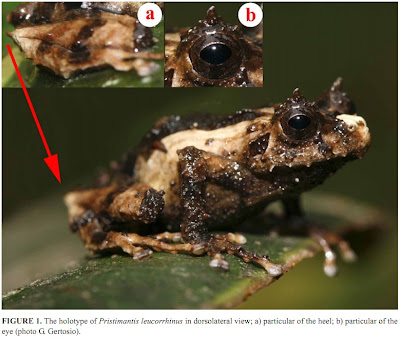 Etymology. The specific name is derived from the Greek nouns leucos, meaning “white”, and rhinos, meaning “snout”. The name refers to the distinctive white squarish spot on the nasal region. 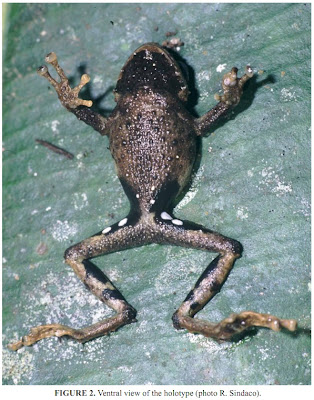 Distribution and habitat. Pristimantis leucorrhinus is known only from the type locality (Fig. 4), a montane cloud forest on the Amazonian slopes of the Peruvian Andes, otherwise known as the Peruvian Yungas. The single specimen was found at night (21:00–23:00 hr) on a composite leaf of a tree, 2–3 meters above the ground, next to a path, during a light rain. No call was associated with this species. Only three other syntopic anurans (all Pristimantis) were found.
According to Catchpole (2004), the study site is classified as primary forest, although very selective logging may have occurred in recent decades. The site is located in a steep valley bottom with a westerly aspect (fig 4). The forest has a dense 15–25 m broken canopy with complex stratification and emergents up to 40 m in height. The dominant canopy trees are of the genera Alchornea Sw., Cedrela P. Browne, Croton L., Escallonia Mutis ex L. f., Ficus L., Hyeronima M. Allemão, Miconia Ruiz & Pav., Oreopanax Decne. & Planch., Persea Mill., Podocarpus L'Hér. ex Pers., and Weinmannia L. The broken canopy is the result of frequent landslides and treefalls that result from high rainfall and very steep slopes (20º–55º). The understory is dominated by shrubs and small trees in the families Ericaceae, Gesneriaceae, Melastomataceae, Piperaceae and Rubiaceae. Tree ferns in the genera Alsophila R. Br., Cyathea Sm. and Dicksonia L'Hér. are prominent. Epiphytes are dense on most trees. These are dominated by the families Araceae, Bromeliaceae, Dryopteridaceae and Orchidaceae. According to two different databases, the average rainfall is 1293–2302 mm (the higher value is considered to be more accurate); the average annual temperature is 14.96 °C with a wet season from
October until April in most years (Catchpole 2004). 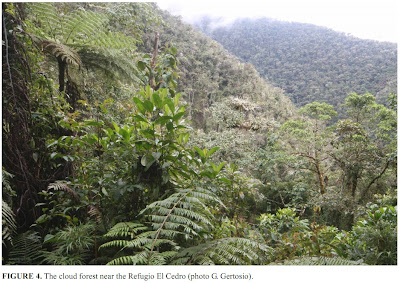 Discussion
Pristimantis is the most diverse genus of frogs on the forested slopes of Andes. According to Duellman & Hedges (2005), along the Andes species diversity seems to decrease as one moves south from Colombia and Ecuador to southern Peru. In northern Peru, Duellman & Pramuk (1999) listed 45 species, whereas on the Amazonian slopes of the northern part of the Cordillera Central in Central Peru only 16 species are known so far. However, until recently many mountainous areas in central Peru were poorly surveyed from a herpetological point of view: in the last 10 years 14 new species of “Eleutherodactylus” (now Pristimantis) have been
described (Dwyer 1995; Lehr et al. 2004; Lehr 2005; Duellman & Hedges 2005, Lehr et al. 2006), suggesting that anuran biodiversity of the eastern slopes of the Andes, and in particular of the Cordillera Yanachaga, is still far from well known.