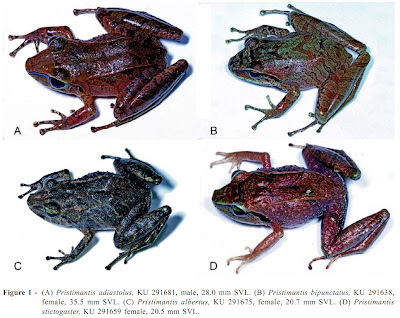 Abstract
Three new species of Pristimantis (Lissamphibia, Anura) from montane forests of the Cordillera Yanachaga in Central Peru. We describe three additional new species of Pristimantis from the Cordillera Yanachaga, a part of the Andes in central Peru. Analyses of DNA sequences of the mitochondrial rRNA genes show that one species is a close relative of P. bipunctatus (P. conspicillatus Group), another is a close relative of P. stictogaster (P. peruvianus Group), and the third is related to several species in the P. unistrigatus Group. The first two species are morphologically similar to their closest relatives but occur at lower elevations. Twenty-nine species of Pristimantis and Phrynopus are known from the vicinity of the Cordillera Yanachaga. The number of species, especially of Pristimantis, is high in the humid montane forest in comparison with other sites in humid montane forests in Peru, but the number is lower than on the western slopes of the Andes in Ecuador.

Etymology - The specific name is derived from the Greek adiastolos, meaning not separated or confused. The name is used in reference to the similarity of this species with Pristimantis bipunctatus.

Distribution and ecology - This species is known only from lower humid montane forest at an elevation of 1200 m on the eastern slopes of the Cordillera Yanachaga in central Peru. The holotype was perched on a leaf about 1.5 m above the ground in riparian forest at night.

Etymology - The specific name is a noun in apposition and refers to the type locality, a river named for Saint Albertus, also known as Albertus Magnus, a renowned scientist and teacher of his time (13th Century).

Etymology - The specific name is the diminutive of the Latin minutus meaning small and is used in reference to the small size of this species.