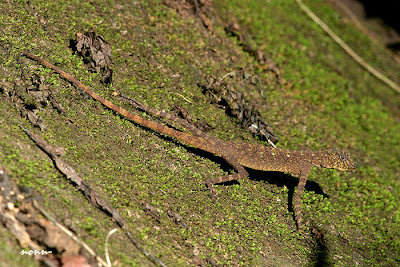 New material of Ptyctohaemus phuwuanensis is described. This rock-dwelling agarnid from Thailand and Laos differs from all other draconines including Ptyctolaemus gularis (the type species of the genus) by having femoral pores, and from all other agamids by having the combination of femoral pores and haired skin sense organs. The taxon is described here as a new genus.
Key Words: Agamidae, Draconinae, Ptyctolaemus, Thailand, Laos, femoral pores, new genus


Etymology: The genus Mantheyus is named after Ulrich Manthey for his contributions to Southeast Asian herpetology. The specific epithet is derived from the name of the type locality.