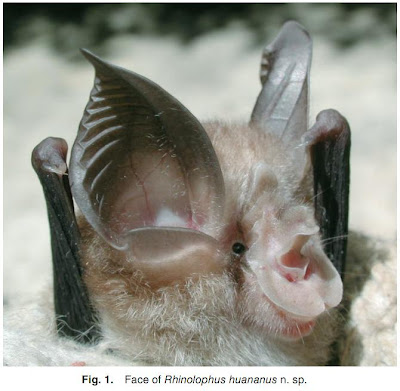 Etymology: The new species is named after the institute to which the first author belongs, the Institute of Biodiversity in Huanan (=China south), Guangzhou University. 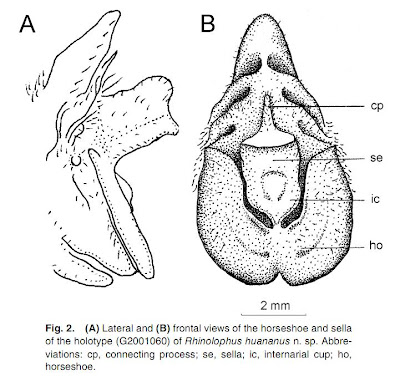 Rhinolophus huananus likely inhabits forests and has been recorded from Guangdong, Guangxi, and Jiangxi Provinces (this study). These areas correspond to part of the Indochinese and southern Chinese divisions of the Indomalayan region, following the mammalian zoogeographical
subdivisions of Corbet and Hill (1992). In China, both R. huananus and R. m. caldwelli were collected in a narrow range from Yingde City, Guangdong Province (in caves about 10 km apart). These collection data strongly suggest the sympatry of R. huananus and R. m. caldwelli in southern China, although we did not get samples of both species from a single cave. Possible sympatry between R. huananus and R. macrotis may offer additional evidence to support the valid specific status of both species. In that area, R. huananus is clearly distinct from R. macrotis in external and cranial characters as well as baculum morphology. Differences in baculum morphology may strongly suggest the occurrence of reproductive isolation between R. huananus and R. macrotis. Future studies to clarify the detailed distribution of R. huananus and R. macrotis in China and adjacent countries are necessary to explore the evolutionary history of the philippinensis group bats in the southern part of China.