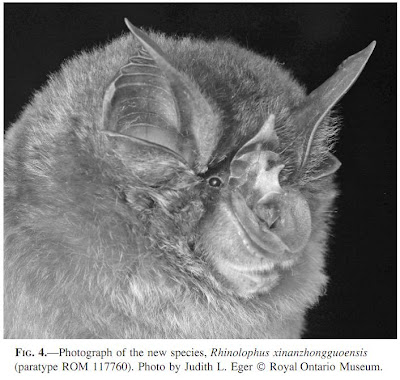 Abstract
A new species of horseshoe bat (Chiroptera: Rhinolophidae) is described from southwestern China. The presence of a wedge-shaped sella and pointed connecting process of the nose leaf aligns the new species to the landeri group in the Afro-Palearctic lineage of Rhinolophus. However, the new species is distinctly separable from these allopatrically distributed species by its noticeably larger body size. Other sympatric large-sized species of Rhinolophus have rounded connecting processes. Molecular systematic analyses based on mitochondrial cytochrome-b sequences confirmed the affinity of the new species to the Afro-Palearctic lineage, but in a clade most closely related to the ferrumequinum, fumigatus, and maclaudi groups. Of these species, only R. ferrumequinum ranges into Asia and overlaps in distribution with the new species. R. ferrumequinum is similar in general body size and external appearance; however, the new species is distinct in the characteristics of the nose leaf, skull, and baculum. The presence of a new species from southwestern China in the Afro-Palearctic lineage indicates a more complex historical biogeographic scenario within Rhinolophus than previously known. The difficulties found in allocating the new species to one of the phenetically described traditional species groups stress the convenience of using a phylogenetically based systematic organization of the genus Rhinolophus.
Keywords: biogeography, Chiroptera, cytochrome b, molecular systematics, morphometrics, new species, Rhinolophidae, Rhinolophus, southwestern China, taxonomy
Etymology.—The species name is constructed from the romanized pinyin Chinese words for west (xi), south (nan), and China (Zhongguo; literally translated as ‘‘Middle Kingdom’’), to mean horseshoe bat from southwestern China. Order of the geographical preﬁxes follows the regular Chinese grammatical use. Pronunciation in English is ‘‘shee-nan-joong-guo-en-sis.’’
Distribution.—Known from Jinsha and Suiyang counties, Guizhou Province, China, and the type locality in Yongde County, Yunnan Province, China (Fig. 3). 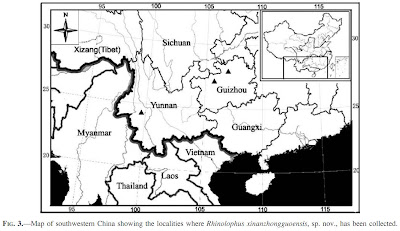 Conservation status.—The new species is a large, distinctive species of horseshoe bat that cannot be easily confused with any other species, and which is known from only 5 specimens collected over a 45-year span in a forested landscape highly modiﬁed by humans and fragmented by farmland. The species is probably rare because there are about 1,200 specimens of other rhinolophids collected from the mountainous areas of the provinces of Yunnan, Guizhou, Sichuan, and Guangxi during the last 50 years and deposited in Chinese museums. These provinces are relatively well represented by records of Rhinolophus specimens compared with other regions in China (Smith and Xie 2008; Wang 2003; Zhang et al. 1997). The species of Rhinolophus most commonly collected in these areas were R. afﬁnis, R. ferrumequinum, R. pearsonii, R. pusillus, and R. sinicus. These species also have been commonly reported from the Himalayan montane areas in the northern fringe of the Indian subcontinent (Bates and Harrison 1997). Based on this information, R. xinanzhongguoensis may be a rare species restricted to the mountainous regions of Yunnan and Guizhou. However, some regions around the Tibetan Plateau, such as northern Myanmar, Assam State in India, and western Sichuan, have not been very well surveyed for bats (Bates and Harrison 1997; Struebig et al. 2005; Zhang et al. 1997), and the new species may prove to also occur in these areas. Immediate study is needed to ascertain its geographic range and population size to assess potential conservation concerns and criteria for inclusion on the International Union for the Conservation of Nature and Natural Resources Red List of Threatened Species (Hutson et al. 2001).
Zhou, Z.-M., Guillén-Servent A., Kim, B.K., Eger, J.L., Wang, Y.Y. and Jiang, X.-L. 2009. A new species from southwestern China in the Afro-Palearctic lineage of the horseshoe bats (Rhinolophus). Journal of Mammalogy. 90:57–73.: http://bioone.org/doi/abs/10.1644/08-MAMM-A-048.1
เขียนโดย pskhun ที่ 10:37 PM