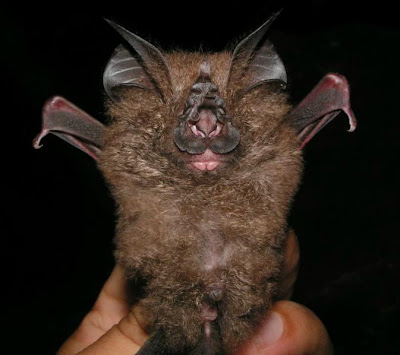 ABSTRACT
Rhinolophus beddomei is reported from mainland Southeast Asia for the first time. It was collected in April, 2008, in Ratchaburi Province, Thailand, in a harp trap set over a stream in a dense evergreen forest. Morphometric and acoustic characters of the specimen are given with a brief comparison to other species of the R. trifoliatus group. Currently, it is not clear whether the Thai specimen represents an eastern extension of the Indian Subcontinent population or whether it is a member of an isolated population which is restricted to continental Southeast Asia. It is suggested that a further review, which would involve material from southern and Southeast Asia, together with R. formosae from Taiwan would be of considerable interest.

FIGURE 2. Shape of noseleaf and pelage colour of (A) Rhinolophus beddomei from western Thailand, (B) R. luctus from northeastern Thailand and (C) R. trifoliatus from peninsular Thailand.

Ecological and conservation notes.– The specimen of R. beddomei from Thailand was collected in harp trap which was set across a seasonal stream at an altitude of 431 metres (see Methods Section). Since there were apparently no caves in the vicinity, it is possible that its diurnal roost is tree hollows or in a rock crevice. In India and Sri Lanka, R. beddomei was found roosting singly or up to three individuals in hollow trees, small caves and hanging from boulders (Bates and Harrison, 1997).

Based on previous information from India and Sri Lanka, the conservation status of R. beddomei is listed as ‘Least Concern’ (Srinivasulu and Molur, 2008). The new material from Thailand greatly extends its known range. However, although Mae Nam Pha Chi Wildlife Sanctuary is officially a protected area, the Sanctuary is still subject to considerable deforestation and hunting pressure. Currently, the Sanctuary, and also other nearby protected areas in southwest Thailand (e.g. Kang Krachan National Park), are being assessed as part of the ‘Wildlife and Its Habitat Assessment in the Corridor Zone under the Biodiversity Conservation Corridors Initiative Pilot Site in the Tenasserim WEFCOM Thailand’ which is a joint project of WCS Thailand and DNP (see www.wcsthailand.org).