[Herpetology • 2006] Cophotis dumbarae • a second species of Cophotis (Reptilia: Agamidae) from the highlands of Sri Lanka 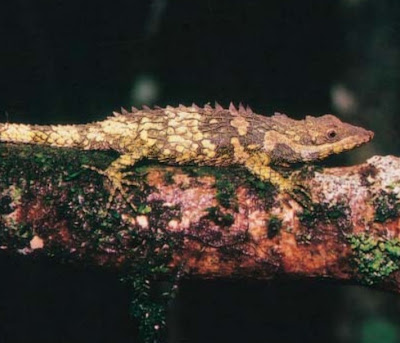 Dumbara Pygmy Lizard, Cophotis dumbarae
Manamendra-Arachchi, de Silva & Amarasinghe, 2006
Abstract
The endemic ovoviviparous Sri Lankan lizard genus Cophotis has hitherto been considered to comprise only a single species, C. ceylanica Peters, 1861, restricted to tropical montane cloud forests at elevations above ~1,700 m in the southern part of Sri Lanka’s central highlands. Here we describe a second species, Cophotis dumbarae, from an elevation of ~ 1,400 m in the Dumbara (=Knuckles) Hills, to the north of the central mountains, and separated from them by the Mahaweli River valley (~500 m elevation). The new species is distinguished from C. ceylanica by having a greater mid-ventral scale count (111–120 [n=3], vs. 74– 90 [n=6] in C. ceylanica); non-carinate, granular (vs. carinate, imbricate) mid-gular scales; smoothly carinate, obtuse (vs. strongly carinate, acuminate) chest scales; triangular (vs. pointed) ventral scales; and a less well-developed (vs. well developed) gular sac. Both species reach approximately the same size (65.2 mm SVL in C. ceylanica, 60.0 mm SVL in C. dumbarae), and do not appear to differ significantly in mensural characters.
Key words: taxonomy, ovoviviparity, new species, cloud forest, biodiversity, conservation
Etymology: The species-name is an eponym for the region it inhabits, the Dumbara Hills of Sri Lanka, formed here as a noun in the genitive case. 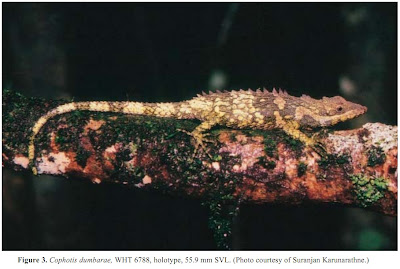 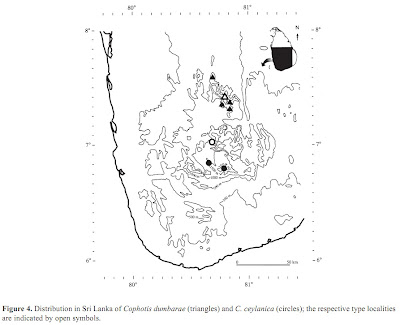 Figure 4. Distribution in Sri Lanka of Cophotis dumbarae (triangles) and C. ceylanica (circles); the respective type localities are indicated by open symbols.
The Dumbara Hills contain a biota with a close affinity to that of the Central Mountains, but with several distinctive, endemic elements. In addition to several angiosperm species, these include eight species of anurans (genera Philautus and Nannophrys), a horned agamid lizard (Ceratophora tennentii), three cyprinid fishes (genera Puntius and Labeo) and five parathelphusid crabs (genera Perbrinckia and Ceylonthelphusa). Some of these are clearly vicars of Central Hills taxa (see Meegaskumbura & Manamendra-Arachchi 2005). The lowlands (elevation ~500 m) of the Mahaweli River, which separates the Dumbara Hills from the Central Mountains, appears to have served as a barrier to the dispersion of highland species between the two mountain ranges, though no attempts have yet been made to date this divergence or relate it to the island’s climatic or geological histories. Schulte et al. (2002) showed, however, that Lyriocephalus diverged from Cophotis ~10.8 mya, and that the populations of Lyriocephalus scutatus of the Knuckles and Sri Lanka’s south-western lowlands diverged ~4.3 mya. 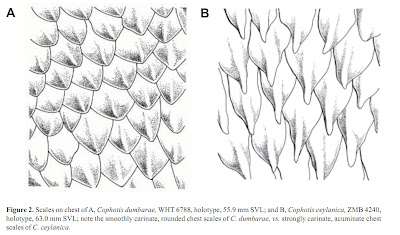