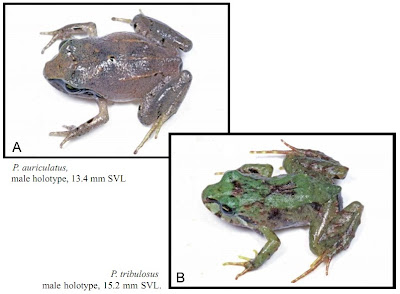 Abstract
Two small new species of terrestrial frogs of the genus Phrynopus are described from the Andes in the Departament of Pasco in central Peru. The presence of a tympanum in one species is shared with P. peruanus. The second species shares characters with the larger P. dagmaraefrom the Departament of Huánuco. The new species are the smallest known members of the genus.

Etymology. The specific name is Latin meaning having an ear. The name is applied to this species because of the presence of a differentiated tympanic membrane.

Distribution and ecology. This species is known only from the type locality in humid montane forest, where both individuals were found on the ground after rains. 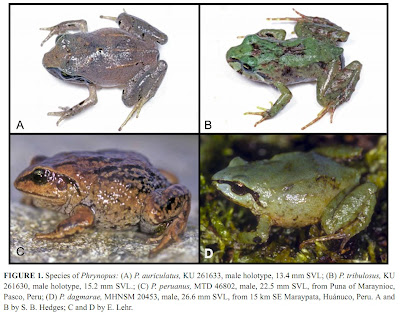 Etymology. The specific name is Latin meaning thorny. The name refers to the short, thorn-like tubercles on the heel and outer edge of the tarsus.

Distribution and ecology. The species is known only from the type locality in humid montane forest, where it was found deep within a mossy bank by day.

Discussion
Species of Phrynopus have restricted distributions at elevations of 2200–4400 m in the Andes in central Peru. Most frequently they are the only anurans found at the higher elevations, and there are few cases of sympatric pairs of species—P. dagmarae and P. tautzorum, P. heimorum and P. hortspauli, and P. kotosh and P. montium all at elevations above 2900 m in Departamento Huánuco; P. juninensis and P. montium as well as P. oblivius and P. peruanus at elevations in excess of 3000 m in Departamento Junín; P. juninensis and P. paucari at an elevation of 3600 m in Departamento Pasco (Lehr 2007b; Lehr et al. 2002, 2005b). The type locality of the two new species at an elevation of 2600 m harbors three species of Phrynopus, the two species described herein plus P. bracki (Hedges, 1990).